The Futility of Fall

I spent about twenty minutes raking the lawn right outside the dining room door before going to pick up Charlie from preschool. 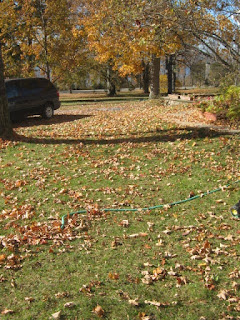 Sadly, this is the "after" picture, though I know it looks more like most people's "before." And I've already raked this lawn twice in the past week. 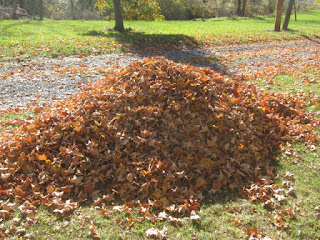 This is the pile I raked up in those twenty minutes. 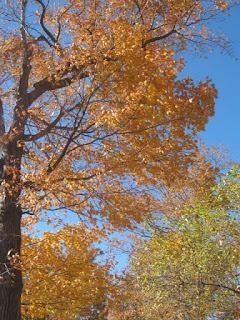 And this is what was still above me. Curses.

So pretty. So much work. Must be fall at Blackrock.

Labels: all about me, Blackrock, manual labor

From the Cameras of Babes

Cubby commandeered the camera again, and through its lens managed to capture the quintessence of parenthood: 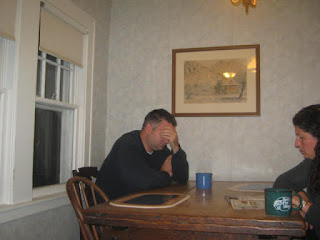 Early morning exhaustion with big-ass cups of coffee. Nailed it.
Posted by Kristin @ Going Country at 7:19 AM 1 comment:

I was supposed to post the requisite "cute children in adorable costumes" photo yesterday, wasn't I? Eh. Here it is: 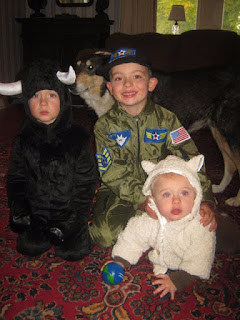 As you can see, Cubby decided to be a fighter pilot. Actually, he wanted to be a parakeet, but there is no such thing as a non-creepy parakeet costume, so I sold him on fighter pilot by saying he could be like Baca. Baca is my dad. He was a fighter pilot for many years. Cubby's suit has a patch for the F-117, which I found out was the Nighthawk. My dad never flew this plane, but I don't think there was an option for an A-10 fighter pilot costume on Amazon.

Charlie wanted to be a bull. This is a very cute costume. Though I did make him promise before I put it on him that he would be a nice bull like Ferdinand. Not that Charlie would ever dream of charging at anyone while in his bull costume. 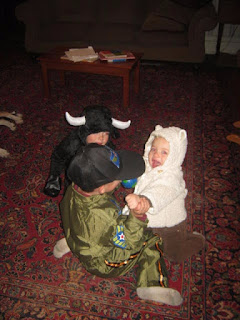 Especially not his baby brother the lamb.

Jack is dressed as Cubby circa 2010. Because the third child always wears the hand-me-downs, even in costumes.

And one last Halloween note: When A. was offered the Halloween bowl to choose his treat after dinner, he chose Sweetarts. Really. Out of all the chocolate in that bowl, he chose Sweetarts. That's like the garbage candy I always tried to trade away first as a kid. Given our basic incompatibility in matters such as these, it's amazing we've managed to stay married for over a dozen years. Or maybe that is the reason why. Sweetarts for him, Kit Kats for me, and everyone's happy.

Happy day after Halloween, my lovelies.