Our meals were pretty lacking in the vegetable department in the beginning of the week. Luckily, the MiL saved me mid-week. Thanks, MiL!

Short version: For the home team--tuna melts. For the away team--tuna salad and egg salad. For me-- leftovers. For everyone--cucumbers.

Long version: A. took Cubby to his First Communion practice at 4:30 p.m. and then to his baseball game at 6 p.m., so I packed dinner for them to eat in between. An egg salad sandwich for Cubby, and tuna salad for A., with cucumber slices for both.

Jack and Charlie had tuna melts and cucumber slices with the last of the ranch dip. Or rather, almost the last of it. Jack actually finished it off by the simple expedient of swiping his entire hand in the bowl and then licking it off his hand. Gross.

Long version: I always cut fries pretty thick, to make steak fries. This time I didn't have any lard or tallow, which is a bummer when french-fry making, so I coated them in olive oil and a little butter. This resulted in a rather tough fry, but still tasty.

I know they were tasty because I had some. Poppy's eczema was improved after I backed off on everything again, so I decided to add back the nightshades to my diet. Thus, I ate some of the fries AND ketchup on my (cheese-less, because still no dairy) hamburger.

The excitement around here. You have no idea.

Long version: A. was gone again, and all I mustered for the boys was a tomato sauce with cream and Parmesan cheese for spaghetti. The children were pleased.

I had a salad with various leftover vegetables and some leftover hamburger, and I did not even bother giving the boys a vegetable. I'm gonna count the tomato sauce and call it good. They were homegrown tomatoes, which I think should make it count for extra, right? Right. 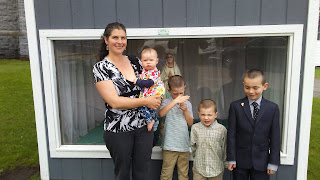 Long version: This was a challenging day. A. was still gone. Poppy was still all stuffy from the cold and gasping when she tried to nurse, as well as displeased with napping anywhere but my lap. Jack woke up with an earache that featured a fever, which meant periodic bouts of crying and a lot of cartoons. Hooray for YouTube and endless Donald Duck compilations. And we were supposed to go to two different baseball games at 6 p.m. in different locations.

I did manage to get Poppy to sleep on her own in my bed midday, so I used that time to peel and chunk up some potatoes. I put them in a bowl of water so they wouldn't brown, and then at dinnertime I just drained them, dried them quickly with a towel, and put them on a pan with cut-up chicken leg quarters (salt, pepper, garlic powder, dried basil) and some olive oil to roast. I don't usually roast potatoes in the same pan as meat, because the meat juices keep the potatoes from getting crispy, but I was trying to minimize clean-up.

In the end, only Cubby, Charlie, and I sat down to eat. Jack was still plastered to the couch and not interested in any sustenance whatsoever.

Cubby got a ride to his game with a friend on his team, and I called Charlie's coach to let him know Charlie wouldn't be at his game. I'm sure his T-ball career is going to tank now, but I think he'll survive.

Long version: A. returned from his trip to Blackrock in the afternoon bringing with him many produce treats from the MiL, including lettuce, spinach, and radishes from her garden, and a garbage bag full of enormous rhubarb stalks. The rhubarb came from the Mennonite farm where we always got our eggs. They have the most impressive rhubarb I've ever seen. The stalks are literally two feet long, even without the leaves. I made a big pot of stewed rhubarb and still only used half of it. Yum.

The potato soup was for a still-ailing Jack, who elected to rest during dinner rather than eat.

Long version: I started to feel the onset of the household cold this day. I think dinner reflects that.

Cubby got another ride to his baseball game with his friend's mom so I could take Charlie to his game and A. could stay home with a still-unhappy, feverish Jack. If that stubborn child would have taken the children's acetaminophen, he would have felt a lot better. Alas, he would not, and the one attempt to make him resulted in gagging and vomit.

Here's a picture of Charlie hitting the ball at his game: 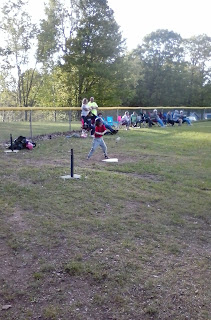 Charlie says, "Take that T and shove it; I hit pitches."

Long version: At least the bread was fresh, as I had to bake a batch that afternoon. The spinach was exciting because it was the thinnings from the MiL's garden, which means ALLELUIA, homegrown greens! Not mine, sadly, but at least from someone's home garden. I didn't do anything with the tiny leaves other than wash and dry them very carefully and dress them with a mustard vinaigrette. They were delicious. Even A. remarked on it.

And now I definitely have the cold, so I shall take to my bed to rest and care for myself for a few days.

HAAAAAAHAHAHA. I kill myself. (If these kids don't kill me first.)

Ready To Be Enchanted


Did you like my offhand comment last week about moving? I was wondering who would be the first to ask for details. It was the MiL's friend Mary. And so, to satisfy her curiosity, as well as all the other hordes of people who are dying to know (or rather, the dozen or so who might be mildly interested), I will tell you.

We are not moving to a new house in this community.

We are not moving back to Blackrock.

We are not moving anywhere in New York state.

We are moving to New Mexico.

Yup, you read that right. New Mexico. Northeastern New Mexico, to be more precise. Although not too precise, because you wouldn't know where this place was even if I told you, and, well, I'm not going to tell you.

I know. Mean. Just trust me when I tell you that you've never heard of it and that it is the middle of nowhere. Even more rural than where we are now. For example, the nearest Walmart is 88 miles away. I have no idea how far the nearest Target is. Probably closer to 200 miles.

Good thing I hate to shop.

So why New Mexico? Because it borders Arizona, where 80% of our children's grandparents, aunts, uncles, and cousins now live. We didn't want to live in Arizona particularly, though, and definitely not in southern Arizona. Too hot.

Our new home is at 6,000 feet, which means that it has four seasons. Even snow, though nothing like here, obviously.

We're renting a house in the village--official population: 94*, soon to be 100--to start with. The kids' new school has 50 students in pre-K through 12. None of those numbers are missing a digit.

It will be by far the smallest place I've ever lived. But it will undoubtedly also be an adventure.

Land of Enchantment, here we come.

* Edited to add: As Drew cleverly noticed, I did indeed first put 96. I realized this at about 2 a.m. after posting, when my proofreader brain suddenly thought, "Wait, did I write 94 or 96? I think it was 96. Damn. I'll fix it when I get up." The reason I originally wrote 96 is because my brain is conscious at 2 a.m. (and many other times during the night) instead of sleeping. But thanks for the eagle eye, Drew. I commend your careful reading and advanced math skills.

Labels: all about me, confessions, moving, randomness

The Definition of Family-Friendly


Cubby is receiving his first communion today and so, in celebration, we all went out to breakfast at our local diner. We've been to this diner before, and I'm not a huge fan of their food, but they have a Sunday breakfast buffet that we thought the kids would like. Cubby loves eating at restaurants but very, very rarely gets to do so.

Buffets are good for kids because there's no delay in getting the food and the options are all visually laid out, so the decision-making is fast. Plus, if they don't like what they choose, they can just get something else.

I normally avoid eating out with my children not only because it's expensive and not particularly tasty, but because I always worry about my numerous and, ahem, rambunctious children bothering the other customers. They're usually pretty well behaved, but they are restless and energetic and prone to roaming.

Luckily, that is not a concern at this particular establishment.

When we arrived, A. pointed out the small "Breastfeeding Welcome Here" sign on the door. I didn't need to nurse Poppy while we were there, but it's nice to know where they stand on public nursing.

Our table was near a large table of older people who immediately homed in on Poppy, who was hanging out with me at the table while A. was helping the boys choose their food. I smiled politely back at the smiling elders, and one of the ladies came right over and asked if she could borrow the baby.

I wasn't sure Poppy would be okay with it, but after a moment of brow-furrowing contemplation, she accepted that this lady could be trusted. The woman told me she had had two sons, two grandsons, and two great-grandsons, but no girls in the family. Then she brought Poppy over to introduce her to the other people in her group.

And there Poppy stayed while I cut up French toast for the boys, filled orange juice glasses, and ate my own food. The lady only brought her back to me when her party was leaving. She told me I had made her day.

Jack spent his time wandering between the fish tank and the collection of little bobbing toys they had near the cash register. Every single person who encountered him smiled indulgently and talked to him about the fish and the toys.

Everyone ate as much as they wanted, helped themselves to gumballs when they discovered the machine wasn't working properly and didn't require quarters (and the lady at the cash register wouldn't let me pay her for them), and left full and happy. Plus, the bill only came to $31 for all five of us.