I was at the village library today picking up some held books when a lady I know only by sight came in and exclaimed, "Hey, I saw your kids in the paper!"

Turns out that yesterday when I was with Charlie at the pediatrician and A. was with the other two kids at the library in the Big Village (conveniently across the street from the pediatrician's office), a reporter from the paper took a picture of Cubby and Jack playing in the kids' room. It was on the front page today. The caption noted, "Their father sat nearby, keeping an eye on them while reading a book on Adirondack deer hunting."

A. even had a quote in the caption--a thrilling, "They have a good collection."--but he neglected to mention this whole thing to me, so I was very surprised to see Cubby and Jack on the front page of the paper.

Of course, the reporter spelled our last name wrong, even though A. actually wrote it down for him. Dutch names are too confounding up here in French-Canadian country, I guess.

Good thing I went to the library today. Otherwise I would have missed our family's five minutes of fame entirely.


I was planning on making meatloaf for dinner tonight. I made tuna noodle casserole last night, which I think means that I am a 1960's housewife, right? Except my tuna noodle casserole didn't involve any cream of anything soup from a can, and I had to use 100% corn pasta instead of regular gluten-laden noodles. It was still good, though.

We had ham steaks instead. Because I could reach those without hauling out the raccoons.

Deer hearts in the car and raccoon skins in the freezer. This is life in the woodchuck lane.

* A. gets them tanned and uses the tanned hides to make hats and mittens for the kids. Fur mittens are the only thing that will always keep their hands warm. So I acknowledge the raccoons' utility, but I begrudge them freezer space nonetheless.
Posted by Kristin @ Going Country at 6:05 PM 3 comments:

Labels: all about me, animals, fun with food, the A team, wildlife


Perhaps you have noticed that all the people who live in the normally frozen wastelands of the United States at this time of year are jumping online to proclaim from the rooftops the unseasonably warm weather? You can add me to that list.

Even here, in the Great White North, it is crazy, CRAZY warm. When we left for Arizona on February 18, it was 24 degrees and there were two feet of snow on the ground. When we got back the following Friday, the snow was almost gone and it was warmer at our house than at my parents' house in Tucson.

The day after we got home, it was so warm I actually opened up the windows in the house.

It was a nice re-entry for the children, who I think were relieved they could go out to play without trussing themselves up like the Stay-Puft Marshmallow Man. Nobody likes that, especially me, because I still have to do much of the trussing for them.

It's supposed to be below zero this weekend, with several inches of snow on Monday, so it's a temporary reprieve. But it is a reminder that spring is on the way. 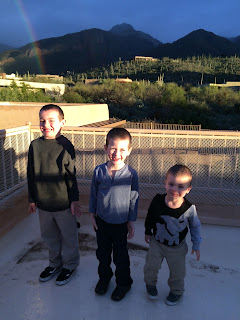 These goobers are ready*.

* In case the saguaro cacti in the background don't give it away, this photo was taken on the roof of my parents' house in Tucson. One of my dad's favorite stories from our visit was when he took the kids up there to look at the mountains and Cubby said,"Wow, there sure are a lot of houses here." You must understand that this is one of the least-populated neighborhoods in the entire Tucson metro area. But I guess to a country mouse from the northwoods, it looks crowded.