Ain't This a Kick In the Head


I've more or less resigned myself to a complete lack of appreciation from my children. But Cubby has really surpassed himself this time with his breathtaking disregard for his mother's toils. Or even existence.

He came home yesterday with a little "All About Me" book he had made at school. It was cute. It was mostly pretty standard fill-in stuff, "I am ___ years old." "I have ___ hair." And so on.

This page made me very proud: 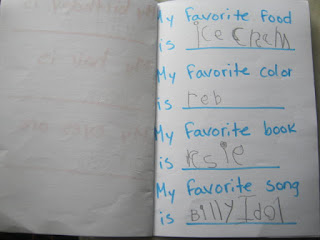 I knew our dance music would leave lasting memories*. 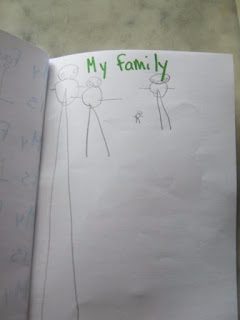 Upon inquiry, Cubby identified the family members, from left to right, as Daddy, Cubby, Jack, and Charlie.

Yes. He didn't put me in there, AS PART OF THE FAMILY. Seriously, child?

Unbelievable. (But, luckily for him, still funny to me.)

* In case you were wondering, as I was, what that book title might be, it's Lassie, a book I can't stand but that the MiL read to him and that apparently also made a lasting impression. Appropriate, considering our dogs, no?
Posted by Kristin @ Going Country at 12:25 PM 2 comments:

Labels: all about me, Cubby, family, school


There I was in the kitchen, making dinner and listening for any further shrieking from the living room that meant that Charlie had knocked over Cubby's block tower again, or that Cubby had picked Charlie up and dropped him on his back because Charlie wouldn't stop saying "bicycle" over and over again, or that Charlie and Cubby had knocked Jack over because he wouldn't leave their cars alone.

You know. The usual dinner-making shenanigans.

But then . . . silence. The door to the living room was closed and I couldn't hear any sounds of strife. So of course I immediately assumed that Jack had turned the TV on (buttons! whee!) and Cubby and Charlie had shut the door so they could watch a little illicit Wild Kratts*.

So I opened the door, fully prepared to scold them and . . . they were sitting quietly on the couch. Cubby looked up and said, "I'm reading a book to Charlie to calm him down."

Oh. Well. Just carry on with your heartbreakingly adorable brotherly love moment while I slink back into the kitchen. Sniff.

* This is a cartoon on PBS that I do not let them watch, because it's supposed to be about animals, but there are bad guys who talk like jerks and WHY, WHY PBS do you have a cartoon about animals that has smart talk in it that of course my children will imitate? Why not just show the animals?
Posted by Kristin @ Going Country at 3:43 PM 4 comments:

Labels: all about me, Charlie, Cubby


According to the New York State Department of Environmental Conservation, the goby fish has become "increasingly common in the state's streams and lakes during the last decade." According to me and my personal experience, THE GOBY IS TAKING OVER THE DAMN WORLD.

Our first family encounter with a goby was one that A. brought back from Lake Ontario in 2014. So it wasn't even in our lake. That was when we learned that while a goby will hit a worm with lightning speed in a lake, its voracious appetite disappears in captivity and it won't eat anything. They just die. Always. But they're not supposed to be returned to the water, because they're an invasive, and they can't be used for bait, so most people just kill them and chuck 'em right on the dock or beach they're fishing on for the gulls.

Not A., though. Oh no. He can't resist the pleading of his children to keep every blessed goby they catch. Which is why he kept the one that Cubby caught in our lake at the village dock last summer, even though he knew it would die.

It did. They always do.

We went fishing at the village dock on Sunday. Both Cubby and Charlie have their own poles now, and it was like some kind of cable fishing show. "FISH ON!" over and over. Except it was always, always a goby that was on. They just kept catching them, and A., indulgent father that he is, kept putting them in a bucket of water.

I knew this wouldn't end well. Sure enough, I took the lid off the bucket yesterday morning to find all ten gobies an unhealthy shade of gray and floating sideways in their bucket grave, all very dead.

I made the executive decision to not save them for any kind of bait preservation and instead dumped the disgusting bucket into the gully.

Next time, I'm really going to put my foot down about any gobies coming home with us. It's getting ridiculous. Invasives, indeed.