Meet (Still More of) the Family 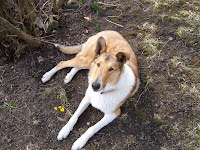 The two dogs you have met thus far aren't actually mine. They're the MiL's. You could say I'm like their nanny, caring for them and giving them affection until their real mother gets home. But this one is my BABIEEEEE. So naturally, she's the cutest and smartest and best behaved. Except not really.

This is Mia. A. picked her out from the MiL's last litter of puppies (did I mention she sometimes breeds her collies?) because when he walked into the puppy pen, she attacked his shoelaces. A sound reason for choosing a dog, yes? At the time, we were still living in a one-bedroom apartment in Albany, NY, but we brought Mia back there with us for the month or so before we moved so she could bond with us. This required A. to get up twice every single night to take her out to pee, as we were potty-training her. And we also had to pick up her poop in a plastic bag, which I personally hated (gross--it's all warm and squishy and sometimes there's a tiny little unnoticed hole, and then . . . just gross) and am so glad we no longer have to deal with. This should be stressed more as an advantage to country living.

But back to Mia. You can't really tell from the picture, but she's huge for a female collie. She's very tall and long, which makes her less than graceful in confined spaces like the kitchen, but beautiful when she runs. She also has a whole lot of scars on her face. We could be charitable and call them freckles, but they're scars. From fighting with her siblings. When she was little, the MiL called her Brunnhilde, because she was bigger and meaner than the others. But obviously, when she became my little princess, I couldn't allow her to keep such an ugly name. And she's also pretty much grown out of the fighting, though she still sometimes has to remind Otty who's the alpha bitch (that would be Leda, but Mia likes to believe it's her).

Sometimes I give her hugs, just because she's so cute I can't stand it(coughcoughchildsubstitutecough). And she lets me, because she loves me. And also maybe she's afraid of me because I am a CRAZY DOG LADY, GET OFF MY NECK WEIRDO!
Yes. Ahem. That is Mia. I hope you've enjoyed seeing the dogs, because next up . . . the cats. Brace yourselves.

Posted by Kristin @ Going Country at 6:00 AM

Dude, at least you're not a CRAZY CAT LADY [like I am, oh sweet jesus help me].

Once I was talking about my cat to a 20-year-old co-worker, and she rolled her eyes and said, "God, just have a baby already."

I can't so much get into the cats. For one thing, they're not so tolerant of hugs. They hide. But to be a REAL crazy dog lady, I think I need to get a purse dog. And then knit it sweaters. Yes. When I learn how to knit, and also, LOSE MY DAMN MIND. Which point may be rapidly approaching.

Hug her all you want! I've definitely enjoyed meeting the dogs. The cats? We'll see.