I Think We'll Keep Her 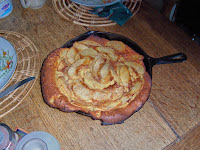 I came downstairs this morning to find the MiL carefully layering apples into a cast-iron skillet. This is what she was making. It's called a Dutch Baby. I don't know where she comes up with these things. It's apples and sugar and cinnamon and nutmeg and some kind of crepe-like crust. It puffs up like a souffle, and then deflates really fast. It's also called a german apple pancake, I think, but I like Dutch Baby so much better. And once again, ignore my complete lack of photo skills. That's just pathetic.

Now, I would not be amenable to making this little treat at any time of the day, and especially not when I first wake up. I am not so much a baker. And this is where it's useful to have the MiL around. Because my God, can that woman bake. She's totally spoiled her sons with baked goods, and now they expect nothing less than the very best. A. won't even eat pie anywhere but this county, because he says only women in this county can make a good pie crust. I think that's a little provincial, but I can see that his point of comparison is a little higher than your average Marie Callendar's pie. It is not unusual to have a dozen pies for two dozen people at the MiL's family holidays. Her mother had 6 kids, and 4 of them, including one of the boys, should have been pastry chefs. Seriously, it's nuts.
And here's the real kicker. She can't even eat this stuff. Because of a wheat sensitivity. Can you imagine baking an apple pie and then watching other people stuff their faces while you eat an oatcake? No, me neither. I'm not that selfless, sorry.
But this mad baking prowess is the reason I will not make pie. I have never in my life made a pie crust, and I'm sure as hell not going to start now. Too much pressure. I mean, Christ, the MiL rendered our own leaf lard primarily for pie crusts. How am I supposed to measure up to that?
I can't, and I'm okay with that. Because I happen to share a house with one of the best bakers outside a professional kitchen. So I can be lazy and just get up on Saturday morning to a freshly prepared apple confection. Works for me.
Posted by Kristin @ Going Country at 7:16 AM

Sounds delicious! Actually, it doesn't anymore. Because you mentioned lard.

Yup, that's strange that here you are reading about dutch babies everywhere. Did you like it? I want to make it again this time using some apples. I, in all honesty, had never heard of Dutch Babies either but the man wanted to buy the mix so I did. After eating them I wondered where they were my entire life...