In the distant, misty past when I started this random mess of a blog, I decided to introduce you to our "family." Meaning the pets. Because there are a lot of them and I talk about them a lot, I figured it would be helpful for you to know their names, at least. And their names are Mia, Leda, Otty, Pitty Pet, Ella, Benny, Alfie, and Buttercup. The last four you haven't met yet, because they're birds and fish, and, well, I just don't get that worked up about birds and fish. James the cat has since gone on to the Happy Hunting Grounds (sad).

As of Wednesday, we have a new cat. Her name is Belle. And despite the following photo, I'm pretty sure she's not possessed. 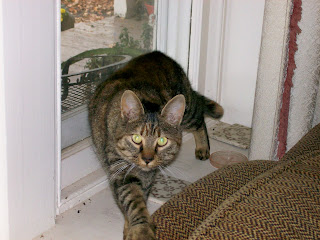 She was being all cute on the windowsill, but of course, as soon as I pointed the camera at her, she got up and made her herself look all freaky. Cats are like that.

Anyway, Belle is young, maybe two years old. She came from the MiL's mother's (henceforth known as Grandma, because it's shorter) house. Grandma lived on a farm, where there were many barn cats that she fed on her porch. A couple of them managed to finagle their way into the house. Belle was one of them. Then Grandma moved to a place where she couldn't take pets, and most of the cats went back to the barn. Except Belle. She really, really wanted to be a house cat. The MiL felt sorry for her and just brought her home one day.

Our house is a bit of an adjustment for Belle. It's not quite as quiet as Grandma's. Pitty Pet is not taken with his new little lady friend. He stalks her until he gets her in a corner, then he pounces on her, hissing and growling. What a crotchety old fart. She mostly tries to stay away from him. The dogs she will have nothing to do with. Mia saw her yesterday and tried to make friends, but she just ran under the bed. Can't say I blame her, since Mia's preferred method of playing with cats is gnawing gently on their heads.

Belle is a nice cat, with a constant, kind of manic, purr, but she does have that bad barn-cat habit of leaping on counters and eating things. Like the butter. Which I caught her licking yesterday. Ew.

So, there's Belle. She has some settling in to do yet, and we hope Pitty Pet will eventually befriend her, or at least stop attacking her with no provocation. Small steps.

Posted by Kristin @ Going Country at 6:30 AM

My sister just rescued a couple of kittens she found in a vacant lot. Thankfully her cat is accepting them, but they do have the interesting habit of crawling up her leg whenever she's standing. Cute, except when you're not wearing pants - which is often the case in Florida.

The butter licking thing scares me. I could never leave out butter again after that.

Belle looks like my cat CUJO. I'll have to show u pictures when i come up in December.

She's awfully cute. Wish we had a kitty.
I had a 3 legged dog that loved to gnaw cats on their head's. They usually seemed to enjoy it. Maybe they just didn't want to hurt her feelings cause she only had 3 legs.