Before we get to our playground adventure, I invite you to view this video of "Playground," by Another Bad Creation.

I had a vague memory of the song, looked it up on YouTube, and found five kids not much older than Cubby rapping and dancing around in bedazzled overalls.

Man, the nineties were weird.

Our playground visit was nothing like that. It wasn't even supposed to be a playground visit. My original idea was to go get ice cream at the recently-opened seasonal ice cream stand, because it was 65 degrees and sunny and, well, I like ice cream. I proposed the idea to A., who was only too willing to abandon his office work in favor of family bonding.

Then he came downstairs and asked if we could go fishing instead at a nearby lakeside state park.

Since two out of four members of the family are All About Fishing and the only other member except me could not care less, I bowed to the inevitable and we went fishing.

Except that park has an enormous playground I had forgotten about. Cubby went straight to it, abandoning his father to a solo--and unsuccessful--fishing attempt. 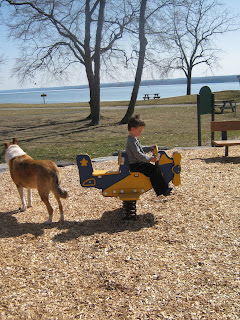 And we totally ignored the "All Pets Must Be On Leashes" sign.

Ran around aimlessly and hysterically . . . 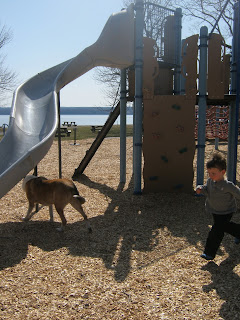 Still no leash on that dog. Or the child. 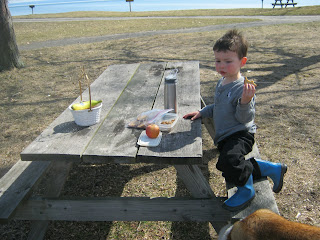 Crackers work better than a leash for controlling Mia. She's not wandering off when there are crumbs to be found. 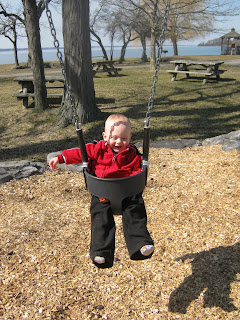 Shortly after the playgrounding was done, Cubby discovered the water. It was about 60 degrees outside, so not terribly cold. The water, however, was about 35 degrees. Nothing daunted, Cubby insisted on stripping down and playing on the shore . . . It was all I could do to keep the underwear on Nature Boy there.

He ended up encrusted with fragments of mussel shells, red with cold from the knees down, and happy as could be.

I'd say it was a success. Except the fishing. That sucked.
Posted by Kristin @ Going Country at 6:04 PM

Sounds like an awesome family party. And I love your "picnic basket."
-moi

No question, the boys loved that one. . . and the dog too!

That's Luna. She'll play outside until the snot is frozen on her nose and scream when we make her come in.

Playgrounds are totally awesome. Take it from one who has spent countless (and I truly mean countless) hours at every type imaginable. Wish I could have been there to add this park experience to my list.

As for fishing, that can be done right across from ya'll's house. As for a real park, that's priceless.

I think that is some Navy Blue and Gold on that plane. It looks like he is giving you your own Blue Angels air show, especially special, since they have been grounded for the year!

But did you still get ice cream? I mean - priorities, here.

I loved that song so hard, and I love you for posting it. Which means that yes, you MUST come to Pittsburgh someday so we can kick it at the playground in real life.