Some time ago, I got an e-mail from Andra, asking if I could do a tips post about cutting the boys' hair. And . . . here it is. Finally.

I should start right off by saying that I am very (VERY) far from an expert. My goal is just to keep my three boys and my husband presentable, which I realize is not a high bar.

But I do keep them presentable, with minimal effort from me. And how I do it is with the clippers.

That's what we call them, anyway. This is what they actually are: Remington Indestructible Hair and Beard Trimmers. "Indestructible" is almost certainly hyperbole, but I've been using them to do four haircuts a month for five years, so that's pretty close.

A. remembers them being about 25 dollars at Walmart when he bought them in New York. The price apparently is now up to about 40 dollars, which is still a really good deal if you compare to a barber shop.

That set comes with oil, which I would encourage you to use. It keeps the trimmers from pulling so much on the hair while you're using them. I put the oil right along the edge of the trimmer's teeth. It just takes a couple of drops.

I find the most important tip for giving boys a haircut is bribing them to do it in the first place. Mine really do not enjoy it, but they know they get a treat of some kind afterwards--a Hershey's Kiss or a cartoon or, in the case of the most recent haircut, a fruit shake (smoothie) on a hot day.

When we lived in the Great White North, I had to do haircuts indoors, in our kitchen, which I hated. Cleaning up hair in my kitchen was gross. Here, I can do it outside year-round. Much better.

So when you're ready, set the victim up on a somewhat low bench or chair. Cubby prefers to take his shirt off. Calvin and Jack usually keep theirs on, to minimize itchy hairs on their skin.

Whichever way, make sure you have a guard on your trimmer before you start. The guard is one of the plastic comb-looking pieces that fit onto the metal trimmer head.

I repeat: Make sure you have a guard on your trimmer before you start.

If you don't have a guard, then you will shave that person bald. Unless bald is what you're going for, double-check for the guard before you begin. I have accidentally shaved without a guard with every single boy and A. when I failed to check before I started or the guard slipped off mid-haircut, so just know it will probably happen to you at some point. But check anyway.

The guards start at #0, which is the shortest--almost bald--and go up to #5, I think, which is the longest. I've only ever used the #3 and the #2. Now I just use the #2, since it doesn't grow out quite as fast with the shorter length.

Once you have your oil and guard on, you can start cutting. Position your trimmers so they look upside down, in the opposite direction of the hair growth, so the teeth on the guard are sort of combing the hair before its cut. Like so. 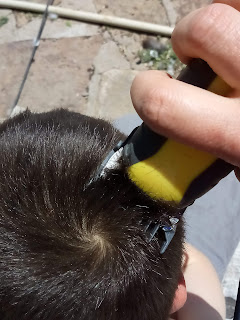 It's really hard to take a photo while working a trimmer, by the way.

You want to work in the opposite direction of the hair growth. So I start on the forehead and work up to the middle of the head, moving from center out to the sides. Then I go to the bottom, on the neck, and work up towards the middle.

I'm sure there are professionals who can tell you a better order to go in, but that's what I do. You have to go over each portion several times, and in the middle of the head where there is likely to be cowlicks or other non-standard directions of hair growth, just do it in all directions until it looks even. Make sure to get all the way to the front in the forehead so there aren't long bits in the front.

When you're working around the ears, you can kind of bend them down out of the way.

Once the hair looks even all over, you can do the close trimming. To do this, take off the guard.

The two parts that need to be trimmed close are around the ears and along the edge on the neck. I cut the boys' sideburns (not that they have real sideburns--I just mean the hair next to their ears) even with the middle of their ears. That gives me something to line up with. Make it as even on both sides as you can.

Then around the ears, bending them out of the way, because if you're going to draw blood, this is where it will happen.

Then continue on below the ear and around the neck in a curve, making an even curve all the way around to the other ear. Repeat the ear trimming there on the other ear, and you're done!

You can use a cloth at this point to wipe off all the little hairs stuck all over. I have the boys remove their shirts if they haven't already and use that. Works way better than trying to use your hand.

And then they have to have a shower. And I have to change my shirt. And sometimes my bra, because those little hairs get eeeeverywhere.

That's it! It's not that hard. I have been doing this now for about five years, and while it's a pain, it's much less painful than driving all four boys--I include A.--to an actual barber or salon and paying for it.

Lastly, if you mess up a little--which I have, multiple times--don't stress about it. It's hair. It will always grow back.

What a money-saver! We registered for the Wahl clippers at Walmart for our wedding, and boy, have they seen some use. I am currently cutting hair of 6 boys/men. I've been married for 17+ years.

And I hate it so much. This is my least favorite thing to do around the house, but it saves so much money. That being said, I'm getting better/quicker. Okay, the better part might be a stretch.

I've adopted my mother-in-law's practice of giving ice cream if I draw blood. Also, I do winter haircuts and summer haircuts (shorter so I can see the ticks better).

After yesterday's sheep shearing post...you had me wondering.;)

I used to kind of like giving hair cuts.

Now I'm in Jody's camp and wish I could give it up. And, I've definitely given some terrifically horrendous cuts. My poor oldest kid.

Maybe someday if we become independently wealthy (hahahahahaha) that can be our splurge.