Our neighbors kindly offered us four extra roosters this past weekend, which A. picked up and duly killed on Saturday. It was cool enough for them to hang overnight in our porch, so we did that, because it helps to tenderize them.

And then came the butchering.

If you've never done it, butchering chickens is really gross. It's way grosser than butchering an animal like a sheep. And a large part of the grossness is the smell. Chickens--and all other birds--really don't smell like anything you might want to eat. The smell is particularly off-putting if they're dunked in hot water for plucking. 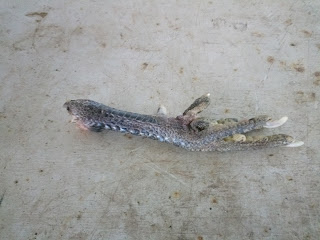 Also off-putting: Finding random chicken feet outside on the front step or on top of the chest freezer the next day. Thanks, kids.

A. usually just skins roosters, but this time he decided to pluck them. Or rather, he decided to scald them and then have the children pluck them. They did, but then their hands smelled like scalded chicken skin. And that smell is particularly hard to banish. Even after washing with soap and hot water, the smell still lingers. Yuck.

Cubby had a solution, though.

He had read in one of A.'s Fur-Fish-Game magazines that scrubbing hands with salt will get rid of the smell after handling and gutting fish, another odor notoriously hard to get out of the skin, as I know well. He figured if it works for fish guts, it would probably work for the chicken stench.

So the next time you have to handle either raw chicken or fish and want to eradicate any trace of lingering smell from your hands, scrub them with salt before washing with soap and hot water.

Thanks, Cubby, And FFG.

Chicken is the only animal I've butchered. It's a relief to hear I've more or less started at the bottom, lol.

Try stainless steel. If it works for garlic, onions, and fish, it might handle chicken too.

All the chicken feet pictures I have seen on here I didn't recognize it at first.
I thought it was some sort of fish . The picture taken from further away. I guess I was going by the silver color as well... thinking of fish. Are chicken feet all different colors? I expected yellow.

G.P: I guess I never thought about it, but yes, we do seem to get a lot of chickens with non-yellow feet. They're mostly black feathers, so I guess whatever breed those are have gray/silver feet.