Yesterday, September 27th, A. fired up the woodstove for the first time. I'm pretty sure this is the earliest date in Blackrock history that the woodstove has been put to use. But here's the thing--it was not cold yesterday. I should mention that at this time of year, the house is always colder than outside, so it wasn't quite as warm inside as it could have been. But it was not, by any standards, cold.
However, A. was convinced that he had caught a chill (it was my fault, of course, for putting on the window fan at night) and was going to get sick if he didn't take immediate action. So he put on his heaviest flannel shirt and sat by the roaring woodstove all afternoon, followed by several hot toddies. 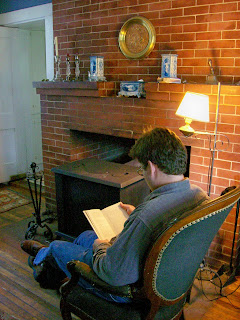 Welcome to the tropics

So was it the hot fire or the hot brandy that warded off certain illness? Hard to say, but A. announced that he had sweated out his chill and would survive after all.

Thank God. He had us all worried.
Posted by Kristin @ Going Country at 5:50 AM

I say it was the hot brandy. And did he sit up in that chair reading all afternoon? Cuz I'd've found me a couch or something.

Yup, in the chair, all afternoon. This is the thing about an old house with old furnishings--we're heavy on the hard, uncomfortable chairs and light on the soft, comfortable couches for reclining. The only decent couch is in the living room. Which is not by the woodstove. So all winter, we all just sit in chairs by the fire. This doesn't bother A. and the MiL, who are used to it, but for sissy, modern me, it's hard to have to sit upright all the time.

Hmmmm, I think I've caught a chill. You'll know where to find me.

I'm with A. If only it would drop below 60 degrees. We've had a warm spell and it was 90 degrees at the football game yesterday. Ugh!

You mean if I say, "I've got a chill," my wife will let me sit by the fire and get shit-faced all day? Excuse me, I've got to go sneeze at someone.

Have you ever thought of moving the comfy sofa near the fire?

Adam's photo reminds me of what Papa may have looked like, with Nana in the kitchen! Lance

Yes, Sweet Bird, wouldn't that be nice? Problem--woodstove is in the dining room. Which is occupied by the dining room table and chairs. Which barely leaves room to put regular chairs by the stove, and certainly no room for a couch. The dining room is the main traffic room, too --it's where the side door is that everyone uses to go in and out. There's just no room.

I don't know why A.'s grandparents didn't just line the chimney in the living room and put the stove in there. But they didn't, and since the stove can't be moved, the dining room it is.

I just found your blog from a comment you left on PW Cooks. I like it and I'm glad your A. warded off the dreaded "plague."
Unfortunately, I didn't and have been spending the past 5 days sneezing, blowing, barking & coughing. And am just now starting to feel human again. And No-one made me a Hot Toddy!
(but the rose` wine I had last night might have helped. lol)

I am imagining what "The Supervisor" (you know who I mean and probably can hear his Hoosier words in your head) might say. "If THE MAN cuts the wood with his Stihl, he can have a fire any damn time he pleases!"