A Vast Expanse of Dung

Just in case you ever had the thought that perhaps you would like to drop in to Blackrock for a visit, eat some good food, relax on the front porch with the dogs . . . let my sister's experience be a warning to you. 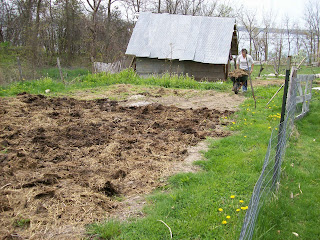 This ain't no Club Med.

Yes, that is indeed my house guest, and she is indeed pushing a pungent wheelbarrow full of decomposing hay and sheep shit through the garden. Welcome to Blackrock!

Part of our garden prep yesterday included mucking out the sheep barn and spreading the muck on the garden before we tilled. This is actually the first time we've done this. It would have been better to have done this in the fall, so the muck could have broken down a bit more. Failing that, it also would have been better to have tilled before we put the muck down, and then again once it was down. But we didn't do that. Lessons learned. Instead, we spread the muck over the whole garden* . . .

BREAK: Let me take this opportunity to announce that our garden is nearly 2,000 square feet. Bigger than some people's houses. Keep that in mind as you try to visualize our labors.

. . . and then tilled. Well, A. tilled. And he had to go over the garden like four times before everything was incorporated enough for planting. It was a Herculean labor. It also smelled less than fresh, and there were lots of flies.

Then the MiL and I planted. We put in two varieties of corn, interplanted with some lettuce and spinach; two varieties of beets; a whole row of chard (that one's for you, Finny); a row of parsnips; a row of carrots; and six each of broccoli, cabbage, and cauliflower plants.

From the time we started the mucking to the time we finished the planting was about five hours. We were all knackered. But about half the garden is planted, so yay! The next big planting will be the potatoes. Which will also kick our asses, but I prefer to ignore that for now and bask in the accomplishment of planting half the garden in one day.

* This is when A. observed that it was "a vast expanse of dung"--he's got a way with words, that man.

Posted by Kristin @ Going Country at 5:42 AM

Kristin, I just caught up on your last few posts. First of all, I'm jealous of your FINISHED garden...because all that work doesn't sound like fun. Second, haven't I always said that cows are the best? (For those who don't know, I love cows. Because I think they're adorable. Of course, I can't remember the last time I was up close next to a cow.) I also run slowly as many times a week as I can. And I'm way less graceful than those cows, I'm sure.

You don't fool me, you mucked the barn JUST because your sis was there and you had help ! You don't want her to ever think about coming back , do you??? Club Blackrock...come visit, stay awhile , you will feel fresh as a daisy when you leave. (One that has been organically fertilized).
; ) Don't forget to take her on a 'jog with the cows' , while she is there.

:cO So. much. planting. space.

Dung and chard. You really have a way with irony, my friend.

In the event that I ever truly traipse your way, I'll be sure to time my arrival strategically to avoid dung hauling.

When is puppy season again?