A. let the sheep out of their pasture yesterday for a little outing. They get bored in the winter, what with the lack of grazing. Grazing is pretty much their only form of entertainment, being sheep and all. So he let them out to wander around and pretend to graze on the various frozen things around the property. Then he moved on to some chores. Namely, splitting and stacking some more wood.

I was unable to assist him since I was Cubby-wrangling (and isn't THAT just a shame), but I did bring Cubby outside so we could at least keep A. company while he worked.

We spend a lot of time telling Cubby all the tasks we have planned for him when he's a little bigger. Poor kid is doomed. 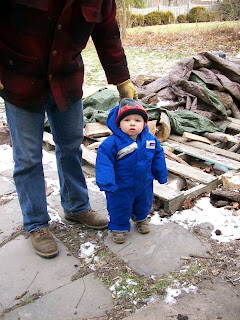 I think he looks ready to stack some wood, don't you?
The dogs were frolicking around with large, unwieldy sticks, A. was industriously splitting wood, and Cubby and I were providing the sparkling conversation, when what to our wondering eyes should appear around the corner of the house . . . 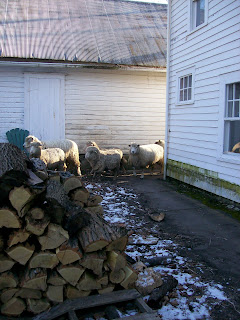 But eight tiny reindeer! Except not so tiny. And actually sheep.
They had heard A. talking about how nice it was to have the whole happy family out together. The sheep, apparently, consider themselves part of the family. 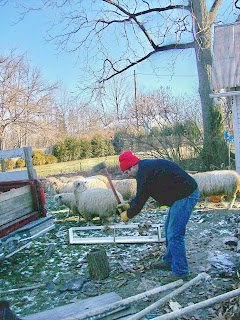 Also wood-splitting supervisors.
There's nothing like family togetherness.
Posted by Kristin @ Going Country at 6:11 AM

Love the photos! Cubby is getting so big, and he looks adorable in the blue snowsuit!

Dang -- Cubby can stand on his own already?! Way to go, little guy! (Or perhaps he's just being held up by the power of the snowsuit?) Either way: CUTE.

J.T.: Cubby can WALK already. Like across a room unassisted, assuming no obstacles. Luckily, he hasn't yet figured out how to get up from the floor by himself. Soon, though, and then we're in for it.

They grow up too fast.....sloooooow down Cubby!

No wait, you want him to grow up quick to help with the firewood.

Oh my gosh I love it. I will admit to wanting sheep and goats more than want human children! The photos of your family's December day are inspiring.

Look at that child standing up already. Holy moly.

Can Cubby walk yet? When he does, will you do a huge post about it? That would be awesome.