One More Straw and This Camel Will Be Broke

So hey!  You know that ever-so-charming demon that is now inhabiting my older son's body?  Well, apparently, he's decided that naps are no longer a good idea.  He informed me of this loudly and at length today when I dared to leave his room at naptime.  His eyes were practically rolling back in his head from exhaustion, but . . . "NO!  Don't WANT to sleep!"

Right.  I didn't fight it, as my insistence yesterday when he told me the same thing resulted in 45 minutes of tears and screaming and he didn't end up sleeping anyway.  So I let him come downstairs today and told him he could choose not to sleep, but I wasn't going to read him any books or play with him until his naptime was over.  So he played with his Legos and told himself stories while I read about cabbages in Mother Earth News.

Shortly thereafter the amiable period ended and in order to stave off yet another meltdown that I was not emotionally prepared to handle, I told him I had a very special treat for him and turned on The Many Adventures of Winnie-the-Pooh, his favorite movie in the entire world.  Also the only movie he's ever seen, but whatever. 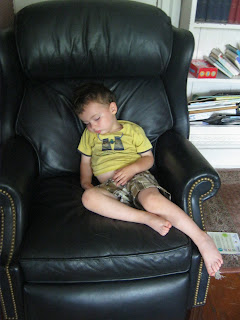 He slept about half an hour, then woke up and promptly had the meltdown I had been trying to avoid.

At least while he was asleep, so was the other one. 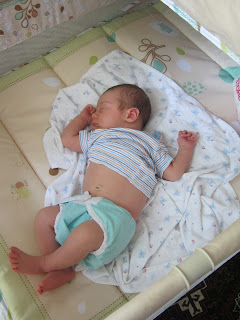 And no lying dramatics with this one, either.

Cubby has not yet refused his actual bedtime, although I am pessimistically anticipating that that will be the next step.  And then you'll find me sobbing outside his bedroom door at 9 p.m. with a bottle of gin while he capers about, rejoicing in the fact that he has finally broken his mother.

Okay, maybe not the gin, but the sobbing might not be too far off base.
Posted by Kristin @ Going Country at 5:44 PM

I. Totally. Understand. Motherhood does feel sometimes as if it can break you. When I was at your stage the strain felt like a dirty little secret. We're supposed to LOVE OUR CHILDREN permanent beatific smiles. Ha! You are so normal. And now so validated.

i think the gin would be 100 percent justifiable.

I swear to you that it does get better. Pinky promise. And yes, the gin is justified and deserved.

Charley looks like he's been getting plenty to eat.

Motherhood would be so much more fun if it wasn't clouded in a haze from lack of sleep.

Ugh, sounds aweful. I think gin sounds like a perfectly good option, perhaps some for cubby too :)

Have you heard about these for Cubby...http://www.amazon.com/Cloud-Plush-Aroma-Pillow-Sleep/dp/B003B1ZWO4

They conveniently forget to put these chapters in the raising your child from birth to freedom books(your freedom, not theirs).
Or you don't read those books until after you have children....then you say ..wth,I thought it was all unicorns and rainbows.
How about a ride in the wondercar(as long as you have your air conditioning fixed)?
You know kids, they can watch a movie 5 million times and still watch it again...so if winnie works, go for it....daily, if need be.

The gin would be totally justifiable, but don't panic yet. Loss of nap time is sort of shattering, but you're on the right track; "If you won't nap, there still has to be an hour (or whatever works for you; I tried 2 hours & lost)of quiet time." The good news is that bed time often gets easier when nap time goes away. There's one of those awful transition periods, when everything is screwed six ways from Sunday, but then it sort of settles out, and night time gets easier (except for the newborn part, sorry, but you know that will pass!). When mine gave up naps there were several weeks of unspeakable meltdowns after enforced naps; my older sister was the one that clued me in that this meant naps were over. Hang in there!