Out With the Blackrock Boys

Sixty-five degrees and sunny? Blanket for the baby, and let's get the hell outside. 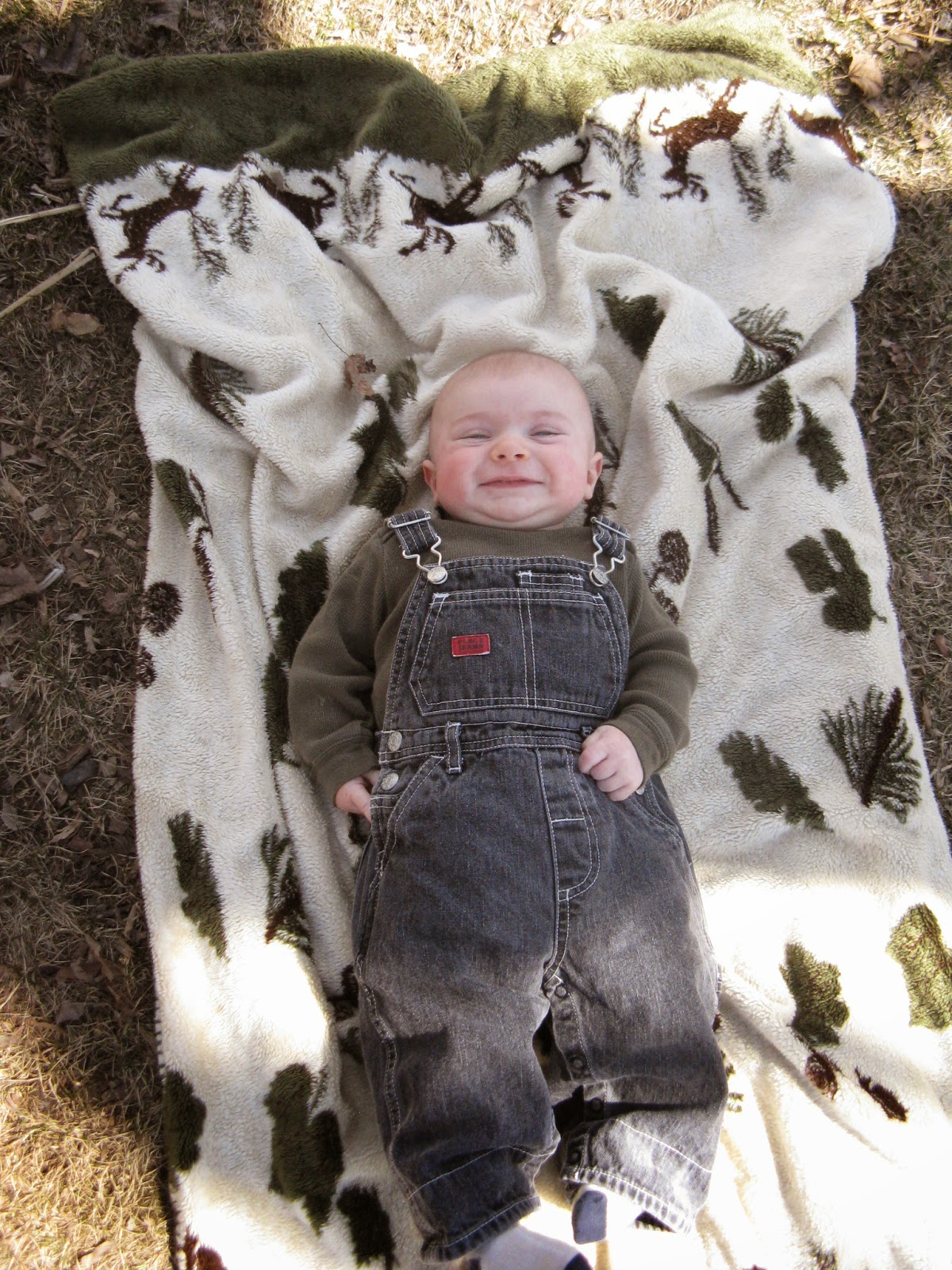 The face of a happy baby who is experiencing his first taste of not-frigid weather. How novel. 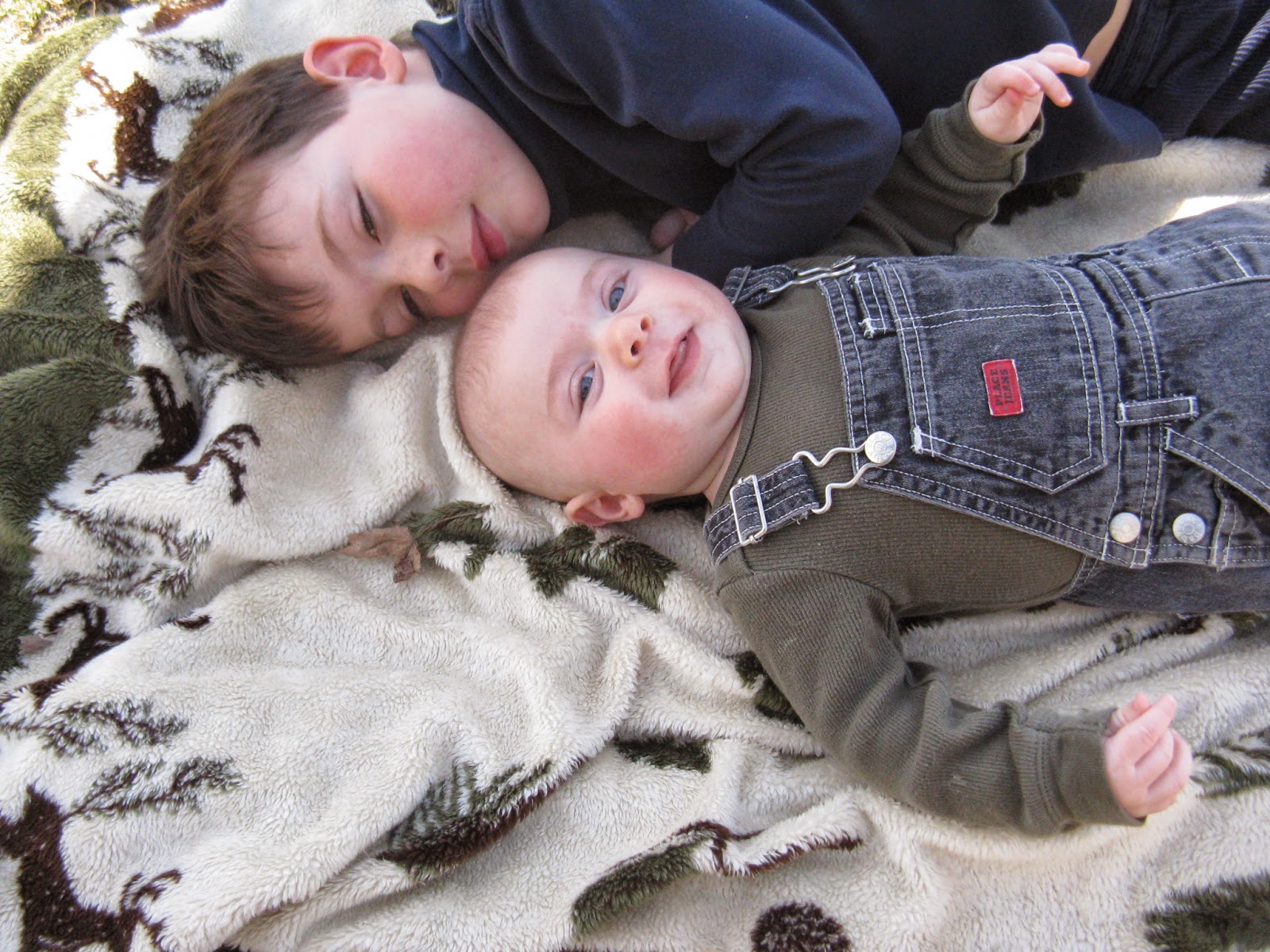 Charlie was napping, or else I have no doubt he'd have been crammed onto that blanket too. 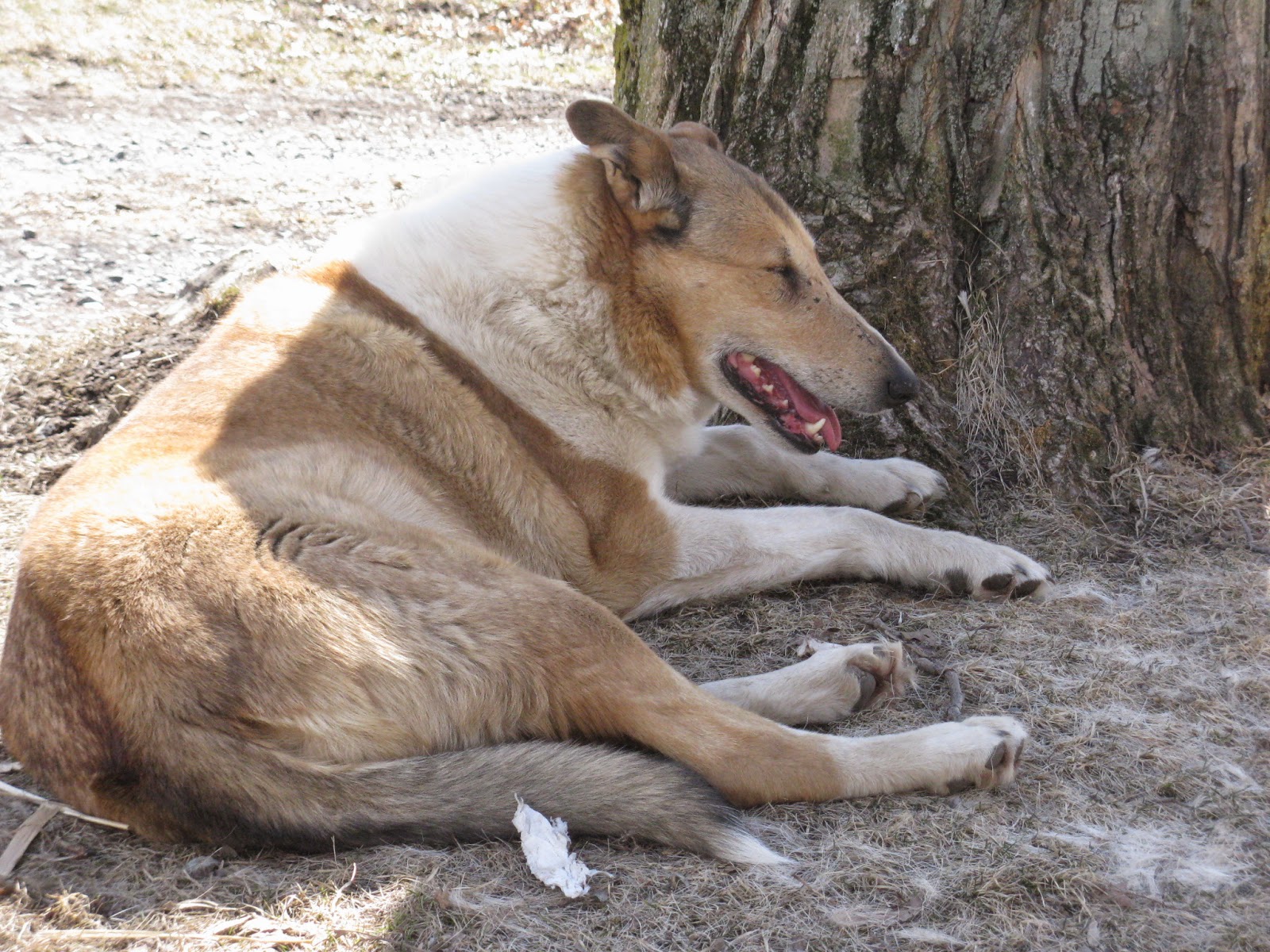 Mia was actually panting in the obviously excessive heat. 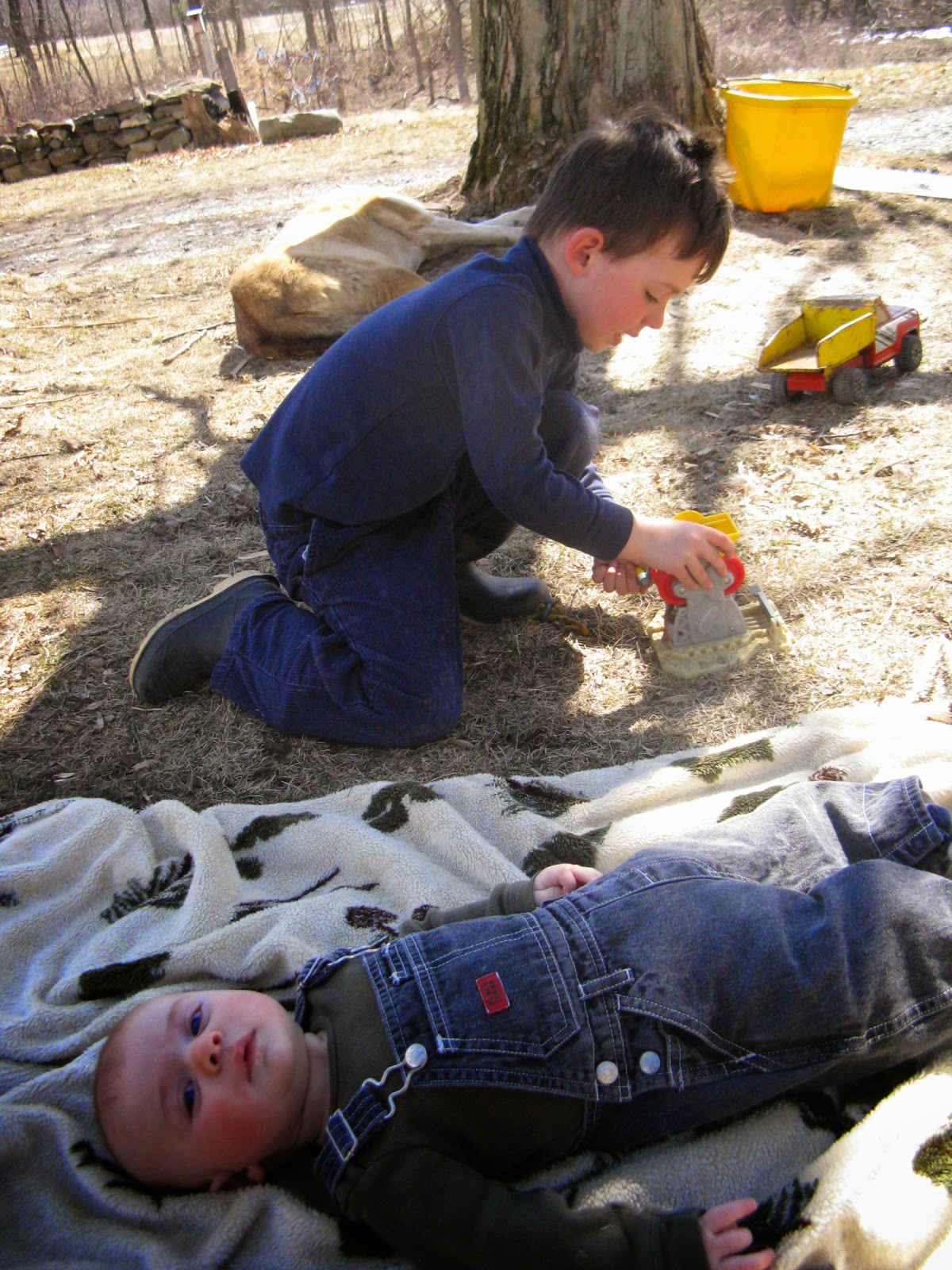 And then Cubby started feeding rubber worms* into the grinding machine (some kind of Play-Doh toy), complete with shrieks from the rubber worms of, "NOOO! DON'T GRIND ME!" Charming. 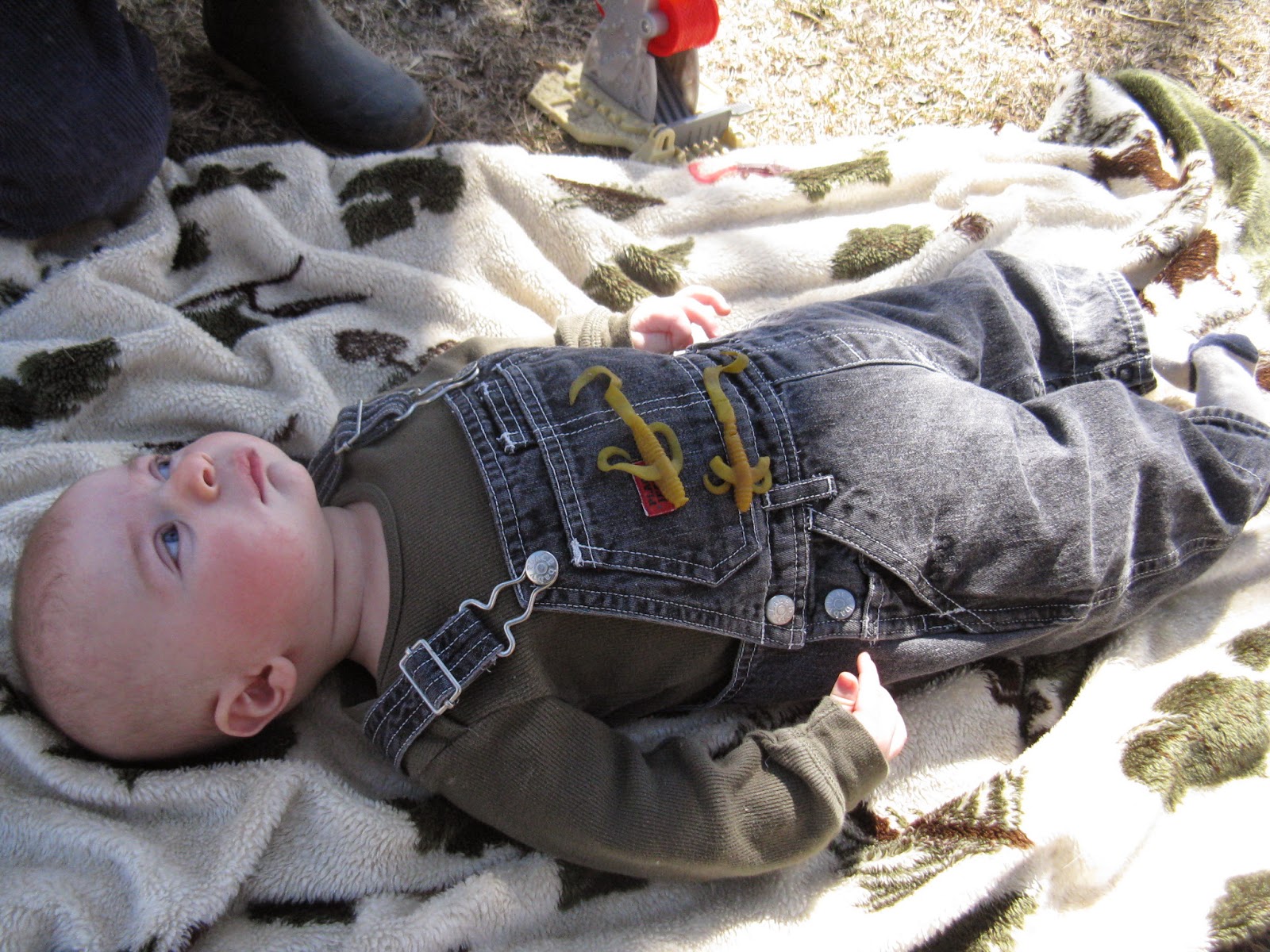 Cubby was kind enough to share some of the rubber worms with Jack, who was obviously fascinated. 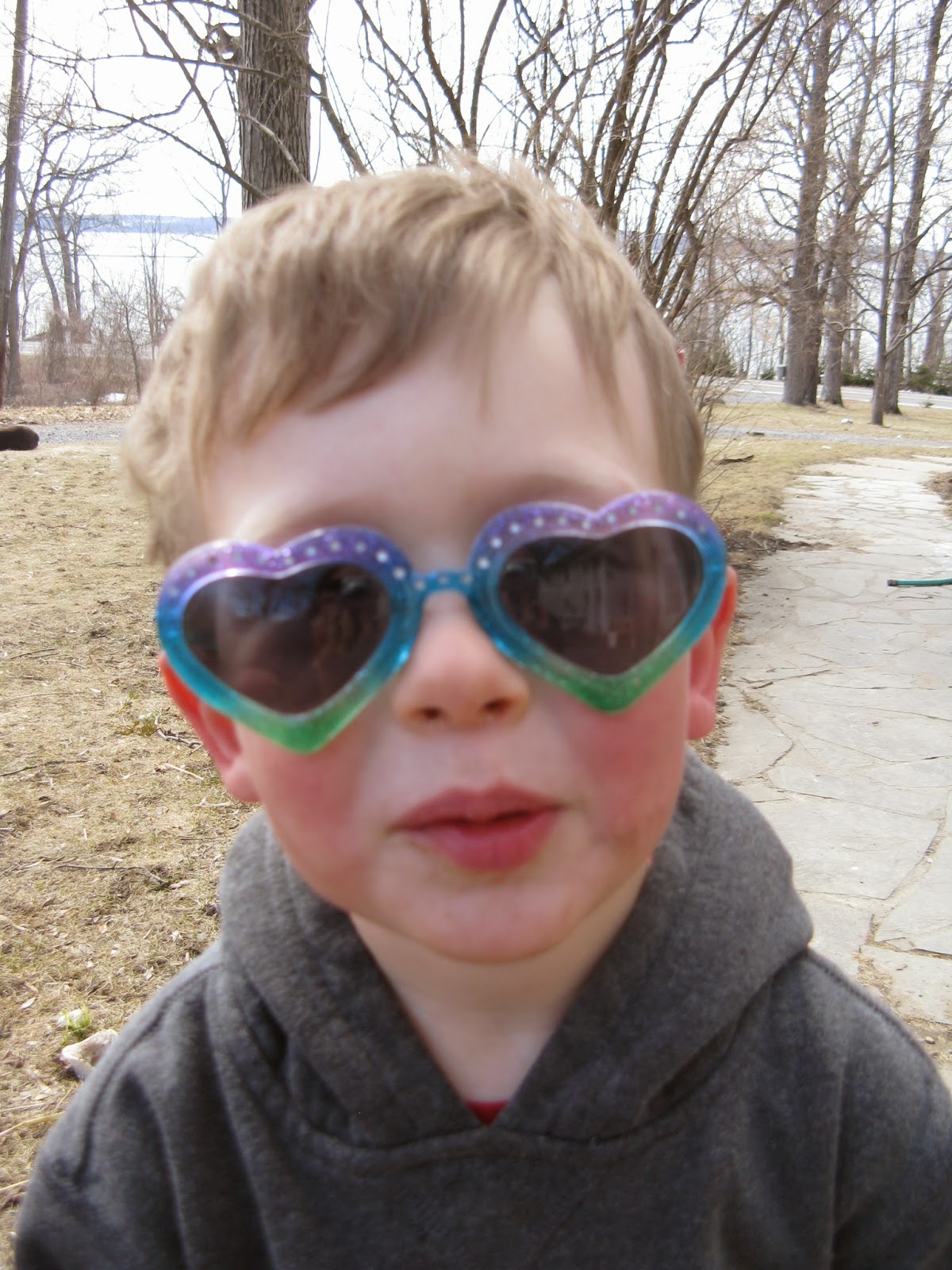 And then Charlie woke up from his nap and grabbed his shades to join us outside. Just try to tell this kid he's not the coolest around. (Yes, they are heart-shaped and jewel-studded. We found them at a park and Charlie LOVES them.)

It gets all kinds of crazy around here when spring comes.

* A. got an enormous box of rubber worms for fishing when he got all that stuff from my brother-in-law's mom. There were probably at least a hundred of them. Now there are rubber worms all over the property, because the children are obsessed with them. The rubber worms go hunting, swimming, and swinging in the hammock. They've been chopped up with Cubby's knife, ground in the grinding machine, buried with the real worms, and God knows what else. Hours of amusement have been had with them, though no actual fishing.
Posted by Kristin @ Going Country at 5:28 PM

Oh my goodness. May be it's the clothes, but Jack looks so much older, wiser, than his month count. You also can't ever disown him based on looks. What awesome pictures. Love the glasses! Thanks for an early Easter treat.

Jack has blue eyes! Is he old enough now that they won't change to brown? I seem to remember that you and A. have brown eyes--and Cubby's eyes are brown and Charlie's blue. My genetics knowledge is challenging me. Mary in MN

Mary: A. actually has blue eyes and I have green(ish) eyes. Cubby has greenish eyes like mine, Charlie has very blue eyes, and Jack so far has blue eyes too. It's still possibe they'll change--though not to brown--but I think he'll stay another blue eyed boy.