Caring for the Wounded

I took Mia to the vet yesterday morning. She needed some vaccinations anyway, and I didn't like the look of the toe that the raccoon got a hold of.

Good thing I took her, because her toe was nearly severed. Not that you could tell from her behavior. Collies are ridiculously stoic dogs, and Mia is even more stoic than the average collie. So she was just walking around with her toe almost off, like, "Whatever. It's just a scratch." She even tried to go back under the porch after A. shot the raccoon, to make sure it was dead, I guess.

Brave, or kind of stupid? Maybe both.

Anyway, I had to leave her at the vet's office so the vet could sew her toe back together. I went to pick her up at 4:30 yesterday afternoon and she was in a very pleasant drug stupor and had a stylish orange camo-patterned bandage on her foot. 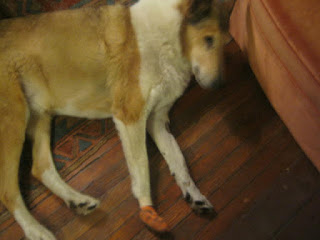 It's her Halloween costume. She's going as a wounded raccoon assassin.

So now I have a week of wrapping her foot in a plastic bag and taking her out on a leash several times a day for potty breaks. A serious pain in the ass, but a dog so brave deserves some care. Maybe even a medal. Though I think she would prefer a steak bone. I could probably manage that.

Posted by Kristin @ Going Country at 5:53 AM

I vote for the steak bone; strong belief in rewarding our furry friends for bravery, funniness, friendliness, whatever.

Lucky Mia gets to luxuriate inside for a week. I think that's a pretty awesome reward for her as well. Glad she's healing up.
-Moi

Ouch. I don't even like reading about the toe much less thinking about how much it would hurt to be walking on it. Serious time commitment, but she was part of y'all's family before the boys, so, with the bravery and injury, she definitely deserves a bump up in status, at least until she heals.