One of the things I most enjoy about having three small boys is telling people that I have three small boys. The reactions are always amusing. The less tactful just say, "I'm sorry." (This is kind of offensive, by the way, and you should never say this, even as a joke.)

The more diplomatic say something cheery like, "Wow, you're a busy lady!" The other day, someone replied, "It must be exciting at your house."

Well, yes, I suppose it is. Also, it is very loud. 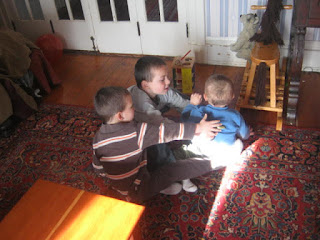 Also also, there are a lot of improvised weapons.  Like that missile launcher behind Cubby there that is taking aim at the stuffed puppy suspended from the rocking horse. 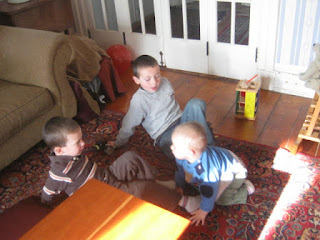 No puppies were harmed, because Jack managed to liberate Puppy before the missile could be launched.

Posted by Kristin @ Going Country at 3:30 AM

Labels: all about me, brothers, Charlie, Cubby, family, Jack

Interesting. No matter that you purposely don't give them toy "weapons". As boys, they find a way to imagine them into being. So different than most girls, but different in a wonderfully fun and entertaining way. Never really understood how appropriate the "boys will be boys" saying is until you exposed us to your daily male dominated world. A real learning experience for us all!