The Weekend of the Buck

A. has spent more time in the kitchen this weekend than he has in the past five years. He was determined to do all the processing of the buck himself. Except for the substantial dishes associated with butchering* that I took care of, he did do it all. All the skinning, all the quartering, all the boning out, and all the trimming.

He also even more carefully trimmed and then tediously threaded on toothpicks many pieces of meat to put in the smoker to make jerky and, eventually, pemmican.

But he wasn't done yet. There was still a big stock pot full of meat in the refrigerator awaiting trimming and cutting up today. Perhaps out of boredom, perhaps because I had made a passing reference to possibly maybe if I feel like it attempting sausage, he decided to make sausage.

So he trimmed some more, and then he started chopping with the cleaver. The steady thumping of the cleaver rang out from the kitchen for a good half hour as he methodically chopped his way through five and a half pounds of venison. And then another pound and a half of lard.

I had suggested we could use the food processor, but he said he didn't want to mess around with it.

We had to use it in the end after all, however, because the lard wasn't cold enough and was just kind of clumping together. So we whirled it all around in the food processor until the fat was well-incorporated into the meat.

Then the seasonings. I helped with this part, finding a recipe online for a Spanish-style sausage and then bastardizing it by substituting garlic powder for green onions, some smoked paprika for the all sweet, and a lot less salt and rosemary than called for.

(Less rosemary because I don't like it as a main flavoring, and less salt because every single recipe I have ever tried for cured or salted meat is WAAAAY too salty. Seriously. We no longer rely on salt as a preservative, thanks to the miracles of refrigeration, so there's no need to overdo it.)

We mixed it all together and then fried a test patty (no casings, so no links).

A. tasted it. "Yeah," he said with a big grin. "It does taste like chorizo. I can't believe we accidentally made venison chorizo!"

A. loves chorizo. Really loves it. So this accidental chorizo was just about the best outcome he could have hoped for.

We froze the patties individually on parchment paper to be stored in freezer bags later. And now all that's left of the buck are some really appetizing scraps for the dogs . . . 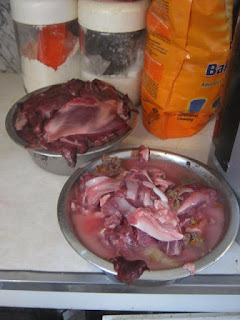 This doesn't look appetizing to you? Well, you're obviously not a dog. 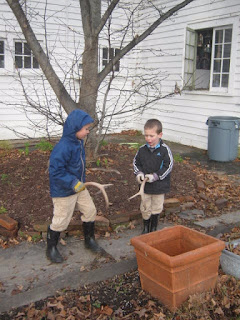 One for each boy. Well, each boy big enough to appreciate them, anyway. 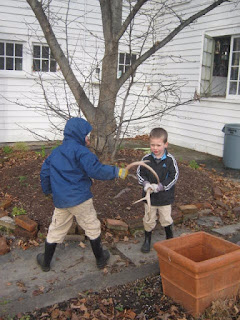 An antler fight was just inevitable.

A round of applause and three cheers for A., who took that deer from field to freezer all by himself. I didn't miss doing all that trimming one bit.