A few months ago, I happened to notice that after the toilet in my bathroom was flushed, the water in the tank continued to run. Usually when that happens, it's because the handle--and therefore, the chain in the toilet that connects the handle to the stopper--gets stuck down, which means the tank continues to drain the water that is refilling the tank.

Not this time, though. This time, the float in the tank was completely missing, which meant that the water wasn't getting the signal to stop filling and the tank started to overflow.

I was very thankful that I happened to still be in the bathroom to notice the water coming out of the tank so that I could turn the valve at the base of the toilet and prevent a disastrous flooding situation.

A. diagnosed the lack of float. He thinks it just broke off and went down the pipe. In a normal place, one would just go to the hardware store and buy a new toilet float.

We don't live in a normal place, however. Driving 60 miles for a toilet float is daunting. But in such cases, ingenuity saves the day.

In this case, A. asked me if we had any balloons around. Sure, I said. What color do you want?

Fortuitously, my parents had just been for a visit and my mom had brought my kids two bags of balloons. So we had many color options.

A. didn't have a color preference, so I chose a purple balloon for him. He blew it up slightly, tied it, and attached it to the rod in the toilet to buy us some time to get a new float next time we were in a place with a hardware store.

And there the purple balloon has been. For three months. We keep forgetting to get a new float, because it just keeps working.

So! Two tips for today. One is general: It's not a bad idea to pretend you live too far from stores to buy something to fix problems. It's often possible to fix your problem without spending any money at all.

And the second tip is specific: If your toilet float breaks, you can use a purple balloon in its place. 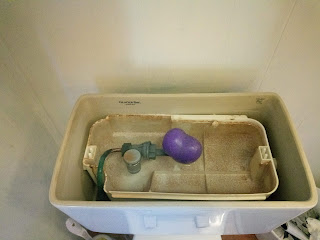 A functioning toilet AND significant entertainment value. Now that's what I call a win.
Posted by Kristin @ Going Country at 4:39 AM

Wow! That is some creative engineering. If it works, it works!!!

I love this! Although I live in the suburbs I ALWAYS try to fix anything that needs to be fixed without buying something to fix it. Even if that means tape!

The MacGyvers of toilet repair!