Long version: Turkey slop is something I learned from the MiL. It's just leftover shredded turkey re-heated in gravy. The resulting sloppy turkey is then served over leftover mashed potatoes or dressing.

Heating it on the stove is key, by the way. Leftover store poultry re-heated in the microwave is a terrible thing. Oddly, home-raised poultry meat can be re-heated with none of that leftover poultry taste.

Everyone got to choose what they wanted as their sides.

I had a salad with arugula, leftover green beans, shredded cheese, and leftover bacon in it, because I really don't much care for leftover turkey re-heated in any way at all. Picky Mom.

Long version: We got several boxes of Annie's macaroni and cheese as a secondary commodities item, which I thought the kids would love. Cubby made a couple of boxes for lunch on Friday, and it was waaaay too salty. I mean, the directions say to use unsalted butter, and we only have salted, but still. The butter alone can't account for the excess sodium.

There was quite a bit left, so I made some more plain pasta, to which I added the too-salty macaroni and cheese along with some sauce from the freezer. The sauce was originally leftover spaghetti sauce from the school cafeteria, which has ground beef in it. I had added to it some leftover roasted tomato sauce I happened to have in the refrigerator that needed to be frozen, so the resulting sauce tasted much better than the cafeteria version.

The resulting mixture of pastas and sauces was eaten with great enthusiasm by the children, which was a satisfying recovery of some foods that on their own weren't all that exciting.

A. had a plate with the last of the leftover mashed potatoes, green beans, and some of the barbecue shredded bull meat with cheese on top, plus some turkey and gravy because there wasn't a lot of the beef.

And then everyone had some of the fresh bread I had baked that afternoon. And Cubby and Jack got out the container of leftover turkey and started eating plain cold turkey. Okay.

I had the salad. Of course. It was more arugula and leftover green beans, one of the very last of the garden tomatoes from the counter, some kalamata olives, shredded cheddar cheese, and diced turkey. If I cut the turkey up small and mix it in with something strongly flavored like kalamata olives, it's okay cold. About the only way I will eat leftover turkey.

Oh! I think I never showed you my laughably giant barrel of kalamata olives: 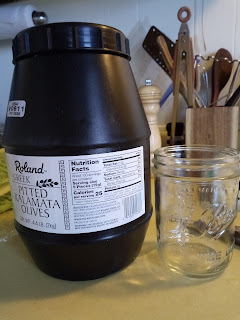 Pint jar for scale.
This is what happens when I buy things online and therefore have no sense of its actual size relative to anything else. That's what 4.4 pounds of olives look like, in case you were wondering. (They are very good olives, though, and olives don't really go bad, so it's fine.)

Long version: Heavily spiced sauces are a good way to make the eternal post-Thanskgiving turkey more palatable. I made the enchilada sauce with a couple of cans of "low sodium pasta sauce" that are frequent secondary commodities items. Despite the name, it has very little spice in it and is mostly just a plain tomato sauce. I added cumin, chile powder, vinegar, onion and garlic powders, and more salt to it.

The casserole was layers of sauce, corn tortillas, a bit of leftover black beans, chopped turkey, some randomly cooked onion, and cheese. Everyone enjoyed it.

The squash was the same kind I had used to make the pumpkin pie for Thanksgiving, except this time it didn't have any sugar, cream, spices, or eggs in it. Butter and salt are much more reasonable for everyday squash consumption.

I had the salad. Which was exactly the same as the night before's salad, and which used up the very last tomato from the garden that had ripened on the counter.

Long version: These mushrooms were getting pretty sad and definitely needed to be used up. I made Poppy's day by letting her wash them for me. It kept her occupied for a good fifteen minutes, including the ten minutes she spent washing and drying the blue plastic tub the mushrooms were sold in.

Long version: I had about a pound of ground beef I hadn't used for the cheeseburgers the night before, which I simply browned and combined with some of the leftover enchilada sauce.

Poppy helped me make the tortillas, too. 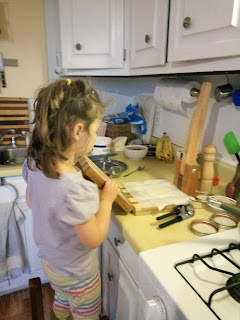 She does love helping in the kitchen (for now).

Last of this squash! Time to cook another one.

Long version: We were getting pretty low on fresh vegetables, so I used a bag of frozen stir-fry vegetables to make, uh, stir-fry. I only used one bag, plus leftover mushrooms and onions and the last of a bag of frozen peas, so it was a meat-heavy stir-fry.

No one complained about this.

Long version: Multi-cultural because I put the rest of the ground beef taco meat on the pizza. It was actually really good.

The children ate the carrots and dried cranberries before dinner, while they were all in Cubby's room reading and listening to his CD player. Carrots and cranberries are the perfect party food, obviously.

A. ate the last of the turkey soup I had made on Sunday, thereby finishing the turkey exactly a week from the day it was cooked. Well, except for the five quarts of stock and meat I froze.

I love the phrase multi-cultural pizza as code for using what you got. Made me chuckle.

I really enjoy reading your blog and your perspective from a totally different area of the US than I live in. I am intrigued by your posts about "commodities". Have you touched on these in a previous post? Exactly what are they and how are they distributed? Please keep blogging - your creative menus are an inspiration to me when I get bogged down trying to put meals on the table!

Linda: Did she call it slop? That's my kids' favorite part.

Sheila: It's all in the branding.

ladybug: Thank you! The commodities program is a USDA program that gets food to elderly people below a certain income level. Possibly other people, too, but all the people I know who get it are elderly. The food is delivered to our parish hall at the end of every month, and then a box is put together for each person and brought to their homes.The box has things like dried beans, flour, butter, eggs, canned meat, shelf-stable milk, dried fruit, and the vegetables that are too big or otherwise odd for easy selling. We have several elderly neighbors that get the box and they frequently give us their excess (because how many dried lentils can one person eat?), and also when there's a particularly big delivery, the lady who's in charge of it at our church will ask me to take some of the extra.

No, she didn't call it slop. But I love how you do! (It does really look like slop!!)
And for tonight, I decided to make hot dogs with scrambled eggs & onions.
Linda

Kit: I love that you made another pumpkin pie the Saturday after Thanksgiving. Why not?