I woke up to at least four inches of snow this morning, which began the flurry of phone calls to the tune of "Will the School Buses Be Running Today?" 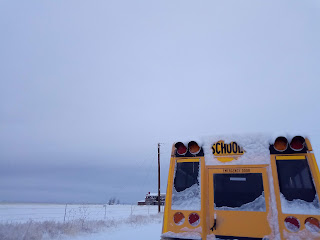 Patiently waiting for the answer.

In New York, school superintendents made the call regarding snow days based on whether the plows would be able to keep up with the weather. But that strategy is dependent on the roads actually being plowed at some point.

That is not the case here.

We do have snowplows here, but far fewer of them, and they don't even try to plow most of the roads in the county. Because there is only one paved road. That road is kept pretty clear, but all the innumerable dirt roads, to say nothing of the lanes and long, long dirt driveways that lead only to one ranch house? They don't even try to plow those. If you live at the end of a seven-mile dirt driveway, you get out in your 4-wheel drive, or not at all.

Most of our students are in the latter situation. A.'s bus route is over 100 miles every day. Exactly zero of the kids on that bus route live on the paved road. Almost half of the route is on unimproved dirt roads.

And in addition to all of that, each of the buses (there are only two) has to go up and down a steep hill with switchbacks.

This is why, when we have snow or other bad weather, the superintendent calls the bus drivers to see if they think they can safely run their routes.

This morning, the answer was no. 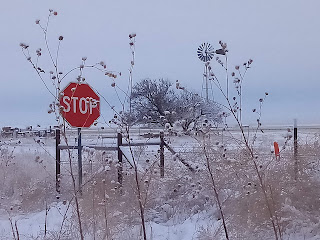 Luckily for the school in this age of COVID, all of the students have their own laptops, so it's easy to send the kids home with their computers when the forecast calls for inclement weather, and then make the call for virtual schooling in the morning.

Unluckily for the kids in this age of COVID, that means no more snow days.

It is much safer, though, and less nerve-wracking for the bus drivers. Because driving unplowed dirt roads for a hundred miles is no one's idea of a good time.

Posted by Kristin @ Going Country at 7:46 AM

Based on the YouTube channel I've seen* for a company that exists solely to rescue people who got their cars/trucks stuck very far off-road, I'm going to have to say that yeah, some people do think driving 100 miles off road in the snow sounds like a good time.

Not me, other people.


* When I went to grab that link, I found that there are - of course - several channels dedicated to the multiple companies that do this.

Drew: No comment on those people, except to say that it's a good thing they're not responsible for the safety of a bunch of little kids.

MiL: Accumulating snow isn't a frequent-enough event to need chains on hand. Maybe a few times a year we have the snow-day discussion.