Given the amount of thought and time I put into what I feed my children at home, it should surprise no one that I am not the sort of person who just stops at McDonald's for lunch and gas stations for snacks when we're driving long distances.

Not only would feeding six people that way for two days* result in a serious financial hit, it would also make everyone feel sick, because that is not the sort of food that we can eat more than once without physical discomfort.

I could write a really long, very detailed post about this, but what it really comes down to is passing out food in the car three stages: early healthy foods, middle less healthy food, and later treats.

So when we start out on a trip, the first things I give everyone are things like carrot sticks, snow peas, cucumbers, or cheese. 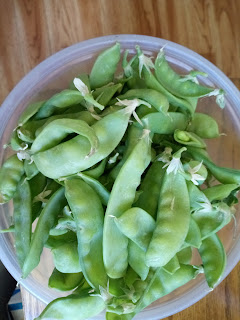 Stage one roadtrip food, straight from the garden.
Next, as everyone gets more bored, I hand out things like pretzels, nuts and raisins, or fruit. Slightly tastier, but still no added sugar.
And last, after lunch when we're still not done driving and everyone is getting fussy, I pull out the treats for more distraction. That includes things like Fritos, graham crackers with peanut butter, cookies, marshmallows, or lollipops.
The idea is that kids don't get sick eating junk early in the morning with a long day of driving ahead, and I have something fun in reserve to appease the troops when the day is getting long and they're really sick of the car.
It's also helpful to have gum in the car, so they have something to chew but aren't actually putting anything else in their stomachs.
It takes a lot of work to feed everyone this way--both in the prep ahead of time and the constant handing of food to everyone while we drive--but it works for us.

* Or longer. We drove four days from New York to New Mexico without stopping at a restaurant once. I made all our food ahead of time and had it in coolers.

I think you deserve mother of the year JUST for that , not to mention ALL of the other great mother things you do.
Your kids will forever remember all of the neat stuff you do for them and with them.