Friday Food: Fishing and the Fair

Long version: I should probably be saving the easy things--like the already-processed bull meat fried with barbecue sauce--for the beginning of the school year, when I have much less time. But, well, I didn't. And there's plenty of bull still in the freezer.

Long version: I had to bake bread, so while that was in the oven, I also roasted a small pan of tomatoes and a few cloves of garlic. Then I used my immersion blender to puree that with fresh basil and balsamic vinegar, and that was the sauce for the meatballs.

I had a mostly empty bottle of mustard, so I added olive oil, balsamic vinegar, salt, and pepper to that bottle and shook it all up to make a salad dressing. That's what I used for the tomatoes and cucumbers. Yum.

Long version: I don't know why mashed potatoes seem like a cold weather sort of food, but I certainly don't make them much in the summer. Maybe because all that mashing makes me too hot.

Long version: Pork country ribs cooked in the morning in the oven (along with some blueberry/oat muffins), then fried in their own rendered fat at dinnertime.

I am very happy it's the season for tomato and cucumber salad. It's one of those things that is really not worth making with the tasteless produce from a grocery store. 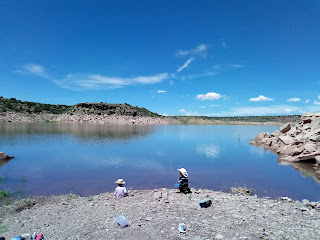 This big lake is an hour from us, but only about fifteen minutes from Cubby's friend's house. He stayed there Monday night, so we took everyone--including his friend--fishing after we picked him up on Tuesday.

Unfortunately, the only fish caught was a small catfish, so we had canned fish for dinner instead. I didn't actually plan that, but I'm always wrecked after a fishing expedition, and tuna is easy.

All I did was dump some cooked, frozen rice into a skillet with a bunch of butter and bacon grease and fry that with two cans of drained tuna and some frozen peas. And then mayonnaise and shredded cheese. Sorta white and bland, but serviceable.

Long version: I had taken out beef stir-fry meat, but didn't actually have the motivation (or the appropriate vegetables) to stir-fry. So instead I marinated it in the last of the mustard vinaigrette, fried it in butter, and added barbecue sauce.

This is the time of year when our vegetable is whatever I pull from the garden, usually raw. Although when I start to get calabacitas in greater numbers--like next week--there will be more cooking of vegetables.

Long version: We spent over five hours at the county fair, watching animals get prepared for showing, viewing the horse show, and running around like maniacs with friends.

Well, that last one was what my kids did. Despite my lack of actually running, I was still totally wiped out when we got home. The fair has that effect. 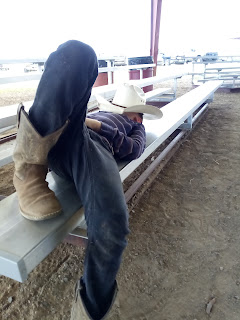 Maybe I should have taken a break midday like Jack did.

So all I did when we got home was fry a can of commodities pork in butter with garlic powder, chile powder, and cumin, then put that in corn tortillas with cheese.

Due to covid finally hitting the home, food was whatever I had on hand. Mostly grilled cheese and pasta. I did cook homemade Mac and cheese and veg for one birthday night. She wanted lemon poppy seed muffins for her treat which her brother got from the store. (The 2 working teens haven't got it- they're hiding from the rest of us very effectively. ) now it's very hot again so used gift cards last night to get enough pizza to last a few days. The only baking I did was a batch of banana bread to use up old bananas.
The blue sky above the lake- glorious! Enjoy your weekend!

mbmom11: Yuck. I hope your experience with covid hasn't been too severe, although even mild illnesses are a drag when they cycle through everyone in the family. Here's hoping for 100% health for your household soon!

I cannot remember what all we ate so I am working backwards…
Thursday: hamburgers, coleslaw, baked beans, French fries
Wednesday: family event sponsored by my husband’s union so we had dinner provided for us before the soccer game (our first time watching major league soccer)
Tuesday: pulled pork sandwiches, salad, baked beans
Monday: various leftovers (fajita bowl for me)
Sunday: fajitas

It's been a balancing act diet wise around here, one family member is on antibiotics and antifungals, so finding things that are low carb and easy on the stomach has been challenging, plus I'm trying (sometimes failing) to stick to a migraine elimination diet to figure out my triggers.

Saturday and Sunday is always homemade pizzas; I make enough so that we can stretch it for both dinners.

Monday was a chicken and rice casserole, dairy free and most everybody likes it.

Tuesday: always Taco Tuesday, it's nice because people can choose what they want/can tolerate. I haven't used taco spices in years since one time my husband left out the taco seasoning packet, and everybody said they liked plain beef better.

Wednesday: Salmon burgers, watermelon (on sale), and corn on the cob, plus coleslaw.

Thursday: Hamburger stew for a stormy late dinner after going to confession.

Monday: something possessed me to buy a pound of clearance chicken necks for some reason. I made crockpot soup with them. Tossed in some veggies, canned broth, and the chicken leftovers from the day before. Also made homemade gnocchi to toss in (two cups of flour, two eggs, a container of sweet potato baby food that's been sitting in the pantry for awhile. Mix up in the food processor, then pinch pieces off and toss in boiling water or broth).

Tuesday: hamburger helper with ground beef, frozen veggies, and a box of Mac and cheese.

Wednesday: Soup made with a pound of chickpeas, lots of garlic, and a smoked turkey leg we had in the freezer.

Friday: frozen pre-breaded fish fillets and... potatoes maybe? Not sure yet.

We spent four whole days and two part days at the county fair last week, and I have never been so tired in my life.

This week's food has been utterly noneventful. Also, we got tired of (expensive) fair food.

We have harvested exactly five cucumbers so far this year; no tomatoes. Soon I will have jalapenos running out of my ears, though, for whatever that's worth. The rabbits ate off all the vining plants except two hills of cukes and one of watermelon (and including the calabaza), and all the beans, period. Not a great result.

Friday-a family birthday, and I had a request for a salad that involves romaine lettuce, bacon, dried cherries and mandarin oranges. Also a request for strawberry shortcake. I had to buy the lettuce and strawberries, but it was good anyway. The 7 year old had a pbj, grapes, and dessert.
Saturday-zucchini, pasta, and feta cheese, and corn on the cob
Sunday-taco salad. The 7 year old had tortilla chips, sour cream, cheese, and watermelon.
Monday-chicken thighs, pasta, tossed salad. And the 7 year old ate some chicken. A miracle.
Tuesday-another family birthday, but I wasn't in charge of dinner. Pizza, salad, and chocolate cake.
Wednesday-leftover beef fajitas, corn on the cob
Thursday-chicken, baked potatoes, green beans