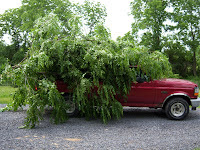 Big Red is A.'s pick-up truck. Can you find him in this photo?
Big Red is, clearly, a work truck. Despite being two-wheel drive, he can get in and out of anywhere with the chains A. bought for the back tires. A. drives him all over the property: pasture, front lawn, paddock, wherever. He has no air conditioning, no CD or tape player, no power anything. Hell, the driver's side door doesn't even open. Something that I'm sure I should be concerned about in the event of A. wrecking his truck and needing to exit quickly in the case of a raging fire, but eh. We'll worry about that when it happens.
ANYWAY, Big Red is used and abused on a daily basis. He carries cinder blocks, lake gravel, trash, scrap metal, and, as you can see, entire trees. This is a black walnut tree that we cut down yesterday to make way for the chicken coop we built. (Yes! Chickens to come! And I will post pictures, but don't get attached, because these birds fall in the category of Not Pets. And you know what that means at Blackrock. Mmm, chicken dinner . . .)
I have to admit that when A. first bought Big Red, I thought he (Big Red, not A.) was a huge pain in the ass. We were living in an apartment in the city where we only had one parking space, so the truck was always parked right behind my car, sticking out into the street. But Big Red has proved himself over and over again since we brought him to his natural element in the country. I suppose it's possible to live in the country and not have a pick-up truck, but it would be really hard. Especially if you want to do a lot of projects, like we do. And forget those pretty-boy, short-bed, extended cab pick-ups. They do not do the job here.
Big Red is not pretty, he is not stylish, he is not easy or fun to drive, but the boy can haul. And that, my friends, is what a pick-up is all about.
Posted by Kristin @ Going Country at 6:30 AM

And what did you have to disassemble to get the supplies for the coop?

And speaking of Not Pets, I never mentioned how big a laugh I got out of your line about that before: "A. loves animals. MiL loves plants. I love eating them." That's not a direct quote, but that's how I remember it.

The materials for the coop came from the same place everything else we've built came from: the old barn A. tore down. Also, we used some of the walnut tree we cut down for posts. We are going to have to buy siding, though. Oh, the shame.

And I bet there is no place the dogs would rather be, than the bed of Big Red (unless it's full of willow branches).

i thought that heap was the result of bad storm or something. i am happy to know that Big Red was unharmed.

Someday you're going to run out of leftover barn parts. What then?

Oh wait, silly question. Then you'll tear down the chicken coop and use that.

We had a lovely old truck we called Yosemite Sam...for about two months. It wouldn't fit in our garage or pass inspection. And as we live in the city and don't usually haul more than groceries, we ended up selling it.

However: CHICKENS! I am afraid if you post pictures, I will get attached. My brain does not understand Not Pets. But this is the same brain that loves fried chicken, so it's OK.