That Boy Again. And His Dog. 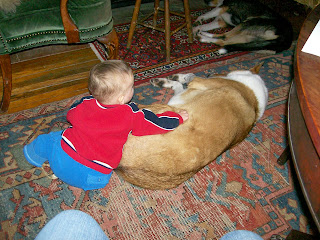 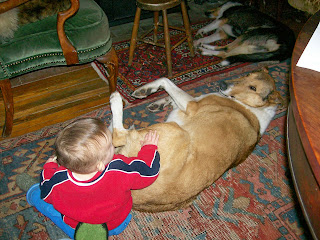 What's this? The hairless puppy is pulling handfuls of fur from my flanks? 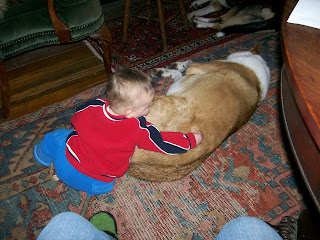 That is a great dog. You are very lucky to have such a dog!

I am waiting for the day he is holding on to one of them and walking around with their help.
A very good doggie.
So much more fun than getting a flu shot. :)
Beth

I had a Saint Bernard at Cubby's age. He was also a good dog. My mom said if I ever strayed out of sight, all she had to do was look for that dog, he was my self appointed protector and occasionally I would ride on his back. He was a very big dog.

I've had several dogs that would let babies do anything to them (pull ears, poke at eyes, yank their tails, climb all over them) until they reached a certain age. It seemed to me at around the same age that older toddlers could begin to understand consequences, sometime around the age of 2 and a half, then the dogs would put the fear of god into the kid when the kid got too rough and hurt the dog. Never had a dog bite a child, just turn around and snarl and bark right in the offenders face. As soon as the dog was done telling the kid off then they went right back to being their old caring self. No grudges ever held against the toddler. The kid learned to respect the dogs and all was well. The one exception I've seen was with my autistic nephew. The two dogs that helped raise him never discipled him, they would just get up and walk away when he got too rough. It seemed like the dogs knew he wasn't responsible for his actions and they didn't hold him accountable they way they did other children.

I love his cute little sweater! Cubby's, that is.

That IS a good dog! I enjoyed Sheila's story about the autistic child's two dogs. Sometimes I think that dogs might be smarter than people.

Mmhhmm - she's a good dog, but also a smart one - she knows who's the most likely to drop food...