And Now Back To Our Regularly Scheduled Country Programming

Forget all this talk of bars and nightlife; we have a topic of real import to discuss here. Namely, sugarin'.
Oh yes. Our first ever sugarin' (sugar-fest? sugar-off?) took place yesterday. And what fine weather we had for it, too. When I woke up at 5 a.m., it was to the cozy sound of the wind lashing freezing rain on the windows. This changed later to sleet, and by about 9 a.m., it had become a steady, heavy snow that was to last all day. And when I say all day, I mean ALL DAY. We do not have a sugarin' shack. There is no shelter over the evaporator set up the milk barn. But A. had grimly decreed that the sugarin' was happening on Sunday come hell, high water, or a blizzard.
We got the blizzard.
So here's how it went down.
The evaporator is this enormous metal drum thing with a firebox on the bottom and shallow metal pans above in which the sap boils. 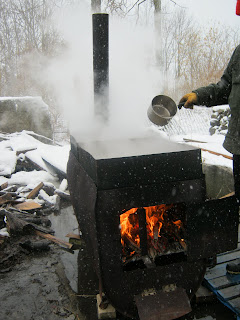 Looks like the portal to hell, produces the portal to maple heaven.
A.'s friend J.--the one who fishes ALL THE DAMN TIME and it's going to be annoying to call him J. throughout this whole post so let's dispense with the mystery and just call him Jason, okay?--had been bringing over truckloads of discarded wood pallets from the farm store he works at for the past couple of weeks. Those pallets, busted up with a maul, were the fuel for the enormous evaporator. Or, as A. affectionately called it, Big Boy.
A. started the fire in Big Boy's belly around 9 a.m. and had it good and hot by the time he poured the first of the sap into the pans on top around 9:30 a.m. There are actually two pans--a larger one for the initial boiling down, and then a smaller one into which the sap is transferred once it's more concentrated. The smaller pan, due to its smaller surface area, evaporates the sap a bit slower and is therefore a little more controllable at the end of the process.
The big pan holds about 30 gallons of sap. We had about 60 gallons, so as the sap concentrated and reduced in volume, more was added until it was all in the pans. The sap was initially strained before it was poured into the pans, just to get rid of bugs, sticks, and other assorted gross woodsy things you don't want in your syrup. Most people use cheesecloth. We didn't have any cheesecloth. So we used some of Cubby's (CLEAN, thankyouverymuch) old gauze diapers. Oh yes, we did. Worked great, too. 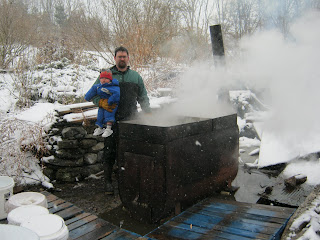 Cubby was happy to contribute. Not so happy outside.
Anyway, this all took awhile. I think the last of the straight sap was added around 1 p.m. All this time A., Jason, and Jodi (of the wood milling adventure) were busting up pallets, feeding the fire, adding sap to the pans as needed, and skimming scum from the top of the boiling sap with my mesh kitchen strainer. All of this, by the way, was taking place in driving snow and they were standing around in about four inches of water. The evaporator was up on bricks, so it was okay, and the men put up a kind of boardwalk of pallets around the evaporator so they could get up out of the water there, but it was pretty miserable. 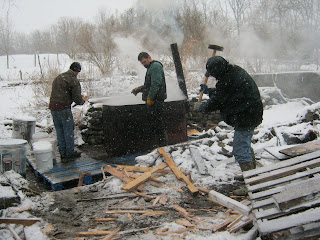 Good times.
And now! A break in the action so we can discuss maple sap. Isn't this FUN?! Yes.
When the sap comes out of the trees, it's pretty much clear and tasteless. It needs to be kept cold, or else it will spoil. But if the weather is fairly cold, it will keep for a couple of weeks at least. So those 60 gallons we're talking about were collected from about 50 taps (actually called spiles) over the course of a few weeks.
It's been kind of weird weather, so the sap hasn't been running continuously all that time. We have had some very cold weather, so the sap has frozen in the buckets. When this happens, A. and Jason (who was collecting sap from different trees) would scoop out the ice in the buckets. This got rid of some of the excess water, thereby sort of pre-concentrating the sap. So the sap that we started out boiling was actually kind of sweet to begin with, like weak soda. That's good, because it reduces the boiling time necessary to reach the desired syrup stage.
End sap discussion. And now back to the action!
At around 3 p.m., A. and Jodi dumped the contents of the big evaporator pan into the smaller one, a tricky operation, considering the metal had been in direct contact with flames. They only spilled a couple of cups, though. At this point, the sap had been boiling for about six hours and was noticeably darker and sweeter. A. and Jason had decided to do the final stage of boiling on a propane burner in a big turkey frying pot, because the flame would be much easier to control. When the sap gets to the end, it has a tendency to boil over, so quick adjustments in heat are necessary.
About 7 p.m., they poured around six gallons of sap--now almost syrup--into the turkey fryer and moved the operation into the relative comfort of the shed. After ten hours of standing out in the wind and the snow, the shed seemed pretty luxurious.
Still not done, though! Will it never end? I certainly didn't think so, as I was doing the dishes at 9 p.m., awaiting the announcement that the syrup was done and ready to be put in the jars I had washed for it. One way to tell if the syrup is done is with a candy thermometer. See, the higher the concentration of sugar in a liquid, the higher the boiling point. So when the syrup reads at seven degrees above the boiling point of water (the boiling point of water is 212 degrees Fahrenheit, assuming sea level, which we are), or 219 degrees, that means it has reached the desired concentration of sugars.
We didn't quite get there. At 9:30 p.m. the syrup was almost done, but A. called a halt because he still had to drive Jason to Jodi's house to pick up his truck so Jason could drive an hour home to be at work in the morning, and the roads were really bad. And it was still snowing. So A. decided they'd better quit.
We ended up with two gallons of syrup. It's certainly sweet enough, though the consistency could be a little thicker. So I'm going to just finish it on the stove. After giving Jason his half and giving a quart to the neighbors whose trees we're actually tapping, we should end up with about a gallon of syrup. And the sap keeps running. Which means we'll be doing this again.
So if you've ever wondered why real maple syrup is so damned expensive, now you know. Because it's damned hard work. The end result is pretty amazing, though. It doesn't seem likely that that clear, tasteless water from the maple trees would wind up actually being syrup, but it does. I can taste a very faint smokiness in the syrup, no doubt the result of continuous exposure to, um, smoke as it boiled.
And now, to end on a non sequitur, the boiling sap smells like cotton candy. Fun. 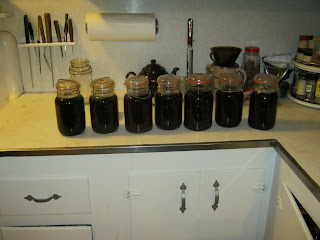 And tastes like heaven. YUM.
Posted by Kristin @ Going Country at 7:00 AM

Good for making your own syrup, it is really interesting isn't it?
One suggestion, after the syrup sits in the jars for awhile 'stuff' ,a kind of a sludge, will settle in the bottom of the jars.
Maybe, next time you get it done put it in frig in large pan or bucket and let that stuff settle out and pour the clear syrup off the top . Then you can can it any time after that it. Bring it to 180 degrees put on rings and lids and it will seal( with regular lids and rings and jars. I don't have any experience with the glass lidded jars you used.
We make ours in small batches too. Single batch syrup is lighter colored and has a less brown sugary taste than most commercial syrups.
IF it happens to get mold on top of it at some point, skim it off, bring syrup to a boil and it is safe to eat. Beth( that was me yesterday with the gosh awful long post )

I bet the smoky flavor makes it extra awesome, like having bacon on your pancakes but without the bacon. Better yet, make maple-roasted bacon with the smoky maple syrup. Sounds pretty good all around.

I used to love sugaring. Been a long time since I've done it though.

What an amazing amount of time and energy for syrup. And so much of it boils away. I had no idea that it would boil down to just 2 gallons.

The real thing is totally worth the effort and the time. Using Cubby's old diapers? Brilliant. Simply brilliant.

Suddenly I really want some pancakes. WITH MAPLE SYRUP. Hmpf, wonder why.

I'll be sure to adequately appreciate all that goes into making my pancakes awesome next time I have them.

So, is everything in your house sticky now?

oh MAN i would love to do that! super work!

wow. they haven't even hung buckets up here yet.

I also want to add......wait till the trees really run !! Look out..you can keep the wood burner going by putting in larger wood for overnight(just make sure you have the pan with enough sap in it) and keep going in the morning by adding more sap. You can even let it go mostly out and start up again and just fire every couple hours or even less often and do something else while you are cooking sap.