Not that I expect this information to be particularly useful for most of you. However, I feel like my purpose on the Internet is to keep a record of all the random and bizarre things I find myself doing, for that one person somewhere out there who may one day be staring down hundreds of pounds of very tough bull meat.

You never know. One day, it could be you.

So, let's get this party started!

Since my bull meat was stashed in the freezer, it first had to be thawed. This takes a really long time. I put the bags of meat in the sink overnight, and they still had frost all over in the morning. So then I filled the sink with water to help them thaw some more. 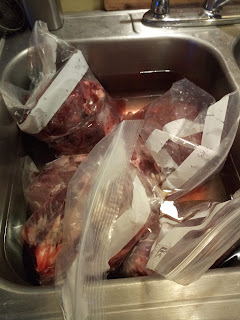 Appetizing.
When I thought it was thawed enough, I hauled out the pressure canner and got my water heated in the bottom of it. Plus started heating the clean jars in the oven to sterilize them. 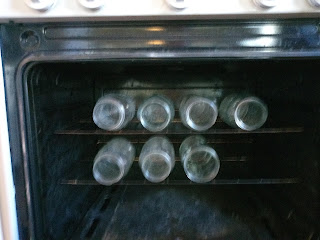 Blurry sterilized jars.
I had to trim some of those random cuts and cut them into smaller pieces. 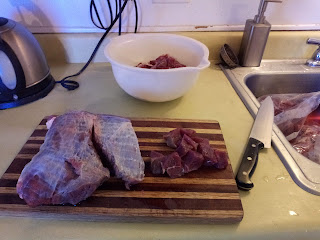 And got bloody water all over the counter. Also appetizing.
Even with all my thawing efforts, the meat was still a bit frozen in the middle. No matter! That's what a microwave is for! At least, that's what my microwave is for at this particular moment.
Once all the meat was trimmed and cut (except for the stuff I had to do very hurriedly after I had already started filling jars because I underestimated how much meat would fit in my seven jars), I set up my prep station next to the stove. 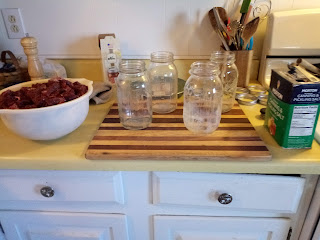 Clearing the counter enough to set all this up is one of the hardest parts, honestly.
I did just a few jars at a time to allow the others to stay hot in the oven until I was ready for them.
So then I heated the meat in the microwave to make sure it wasn't freezing cold--cold meat in a hot glass jar seems like a fast track to cracked glass to me--and stuffed it into the jars.
The most appetizing thing of all.
Each jar got a teaspoon of salt in it, too. I used this flat wooden baton-like thing Cubby carved for me when we were still living in New York to slide down the inside sides of the jars and get rid of air pockets.
Then the rims were wiped, hot lids put on, bands screwed on, and into the canner. 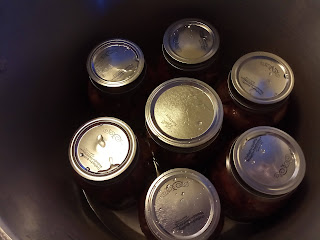 Here we go!
Quarts of beef have to be kept at pressure for 90 minutes. Because I'm at a high altitude, I also have to adjust the pressure higher.
I used all the tips given to me by Karen. in the comments of this post to do this the last two times, and both times, all the jars have sealed. Hooray!
So! Here's what she told me. The meat is raw-packed with no liquid, just the salt. The canner is vented at about medium, rather than at a high temperature that results in crazy boiling. On my propane stove, I kept it at 5. When the canner lid is removed after the pressure is released, leave the lid ajar for a bit, and then take the lid off, but leave the jars in the canner for a couple of hours before removing them. Karen. said two hours, but I think I took them out after an hour and a half.
And with all of this . . . 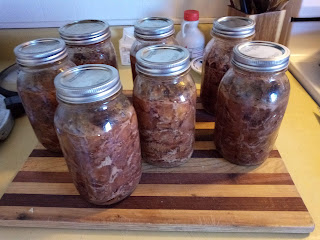 It's a bull! In jars!
So there you have it. Next time you help your neighbors butcher an old bull, you know what to do.
Posted by Kristin @ Going Country at 4:30 AM

And here's another tip--if you ever wonder if a pressure canner is worth investing in, yes, it is.

Typical of me, I have two more things to add. ;)

Jars can break simply by the dry heat of the oven, too, so when a hot jar is needed, I boil a cup-plus of water in them in the microwave — like boiling plus a couple minutes.

But, I find keeping jars and food hot to be a ginormous pain in the neck. You don't have to hot pack if you have time to let your canner heat slowly. Do a cold pack (room temp jars, meat, and canner water) and let it heat on medium-low (say 3.5/10) until it comes to pressure, then carry on as usual.

I'm seriously thinking about getting a pressure canner this year. Soon. We have our home-grown beef in the freezer and I get butchered chickens. I'd like to have meat that is shelf-stable as well as in the freezer.

So, now that you have bull in a jar, how will you serve it to the family?

Kay: I've used my pressure canner more this year than I have all the previous 11 years I've had it. As for using the meat . . . sometimes I'll pull the meat out of the liquid in the jar and just fry it with spices, maybe add some potatoes or vegetables right to the pan with it. Then I use the liquid for soup. Or sometimes I just make soup or chili with the entire jar, liquid and all. I'm sure there are more exciting ways to use it, but . . . I'm not an exciting cook. Basically, any way you would use tender stew meat, you can use this.