Long version: Lenten meals are here again! It's hardly a penance for my kids to eat meatless on Fridays. I mean, what kid wouldn't rather have grilled cheese or tuna patties instead of a chunk of meat for dinner? Particularly the tuna in Cubby's case. That boy does love his fish. Always has.

Long version: The only thing of note here is that every single one of my children likes cooked broccoli. The only other cooked vegetable I can think of that they all eat without complaint is peas. 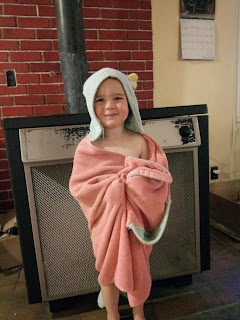 We have peas much more frequently than broccoli, though, because peas come in a convenient frozen form. Broccoli we only have right after a trip to the store, which, as you know, is not a frequent occurrence.

I am aware that frozen broccoli is available as well, but I've never had good experiences with it. Maybe I just never prepared it right, though. Do you cook with frozen broccoli? How do you cook it if you do?

Long version: A simple roast chicken with crusty bread to mop up the juices is a soul-satisfying meal to . . .

Sorry. I seem to have lapsed into Food-Media-speak.

I can't tell you how many rhapsodic Odes To The Roast Chicken I have read over the years. I mean, roasted chicken is good, but I think people get a little carried away with it.

This was just a store chicken. Into the cavity I stuffed a squeezed-out lemon, two cloves of garlic, and the ends from an onion I chopped up and roasted in the chicken juices.

The only one who mopped up the juices was Cubby, who was very disappointed he couldn't have thirds of the chicken (he would probably agree with the food media chicken enthusiasts). I suggested he could use the last pieces of garlic bread to, yes, mop up the juices in the pan.

I make garlic bread as a round loaf, and I keep it pretty soft, so it has lots of soft interior that's good for soaking things up. I don't think standard, very crusty and toasty slices of garlic bread would be so good for that. They're not squishy enough.

But I guess telling people to use "squishy bread" to soak up the juices doesn't sound quite as appetizing as "a crusty loaf." Works better, though.

I had a bag of frozen banana pieces in the freezer, so I used that to make fake ice cream. I also added cocoa powder to it and the kids each got one Oreo, which was all that was left from the package I had bought to make the crust for Cubby's birthday chocolate cheesecake.

They enjoyed the ice cream, but they were REALLY excited by the singular Oreo. Those low standards again.

Long version: But wait. Didn't we just have this night before last? Yes. Did anyone care? No.

I had taken out extra ground beef in anticipation of making either meatloaf or meatballs ahead of time so I could just put them in the oven when I got home from work on Monday. But then we ran out of eggs.

Hamburgers it is! And bread, because I had just made bread the day before.

No one ever complains about hamburgers (I suspect it's the ketchup, which is a rare condiment in our house), and the children certainly never complain about bread with dinner.

Long version: When we butchered the ram in November, A. cut most of the rib meat off the bones. Storing the ribs is a pain because they're too big for the bags we use, so I think maybe he was trying to find a better way to freeze the meat.

I pulled that bag of meat out this day. Ribs are best cooked slow and then crisped up. And sheep ribs are best marinated first.

So I marinated the meat in apple cider vinegar, garlic, salt, and pepper for a few hours, then put it in a covered casserole in the oven at 350 degrees for about four hours.

I didn't add any liquid, and although the meat did release some liquid, it sure released a heck of a lot of fat. So the meat ended up basically frying it its own fat much of the time, kind of like carnitas. 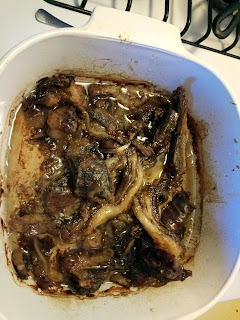 One benefit of this cooking method is that the fat kept bubbling the entire time I had the casserole out of the oven to dish up, thereby avoiding the dreaded Congealed Sheep Fat situation. Nothing ruins a meal faster than that.

I didn't end up crisping it any further because of that frying situation.

The resulting meat was similar to very thick-cut bacon in both texture and appearance. It tasted pretty good, actually, but I figured it might be a bit of a hard sell for the children.

So I let them have some ketchup.

They have ketchup rarely, and it's a handy treat to save for meat that I know they won't be wild about. Dipping almost any meat in ketchup makes it more palatable for them.

And so it proved with this rib meat. Both Poppy and Jack asked for seconds. Of both the meat and the ketchup.

The worst part of cooking sheep meat for me is cleaning up.  You see, there tends to be a lot of fat. And it's a hard fat--not soft like chicken or pork fat--so when it cools, it's solid and very hard to clean up. You'd better have a lot of really hot water and dish soap ready for cleaning up a meal like this.

Long version: I made this soup the day before with about a pound of the ground beef I had thawed that hadn't been cooked yet, in addition to onion, garlic, celery, carrot, chilis, shredded calabacita, frozen peas, and chicken stock. Plus some sour cream at the end, since the chilis ended up being spicier than I expected. As always.

I had also cooked a few extra baked potatoes the night before so I could chop those up and add them to the children's bowls, to make it more filling for them.

Long version: Anyone remember Holy's cabbage? Probably not, so here it is. It had been awhile since I made it, and even longer since I had given any to the children. For some reason, I thought none of them liked it much. Turns out, though, that both Cubby and Jack like it quite a bit. Yay.

Charlie was sick and had a sore throat, so he didn't eat anything but the custard. Which is the whole reason I made it. When children are too sick to eat anything else, they will still eat custard. At least, mine will.

Same as Linda. Buy the bags of florets at Walmart — don't bother with the pieces; so much of that is unpleasantly woody. Little bit of water, like a cup or so, and bring it up to a boil. It only takes a few minutes to steam, like 2 or 3 minutes for the little bag, or 4 or 5 minutes for the big one. Then definitely drain the water right away because, again, mushy isn't good.

I roast it from frozen using this as a guide https://www.sustainablecooks.com/roasted-frozen-broccoli/
It helps avoid that mushy texture and I really like that it goes in the oven frozen, minimal prep for me to remember on a busy night.

I rarely buy frozen broccoli but only buy florets when I do.
-Tex Mex (fajitas, quesadillas, etc) I was very distracted when prepping this meal and the chicken got over cooked… Not burnt just really dry. I was very distracted as it was my late sister‘s birthday and it hit me especially hard this year.
-pork loin, baked potatoes, rice, sweet and sour cabbage
-spaghetti and French bread
-chicken sausage, Brussels sprouts, broccoli, onion, rice skillet
-Tacos
-Leftover buffet

As others have said don't buy frozen broccoli cuts or pieces because they are composed mostly of woody pieces of broccoli stem. The frozen broccoli at Sam's Club, Member's Mark brand, is really good and this is what I buy for frozen broccoli. It's probably the same as the bags of florets from Walmart mentioned by Karen.
Pam in Maine

Yes, I cook frozen broccoli, mostly steamed. Bird's Eye, if I can get it (some of the cheaper brands are too woody). I've been wanting to try roasting it, so thanks, Andra, for the link you provided.

I've been eating leftovers this week. Smitten Kitchen "Roast Chicken with Schmaltzy cabbage." I bet it is something that your family would love. I've made it about three times since I encountered the recipe.

Living close to stores, I never buy frozen broccoli, but I'll bet that roasting it is the best way to cook it. Or I bet it would work in a broccoli/cheese soup, very possibly with curry.

Friday: puppy day! Bean soup made with small red beans, onions, celery, red pepper, broth left and frozen from my carrot and potato mousseline, plus the pork bone from last week's roast. Seasoned with chili powder and cumin. It was pretty good, and I felt clever to have vegetable broth to add.
Saturday: the same soup, but with andouille sausage.
Sunday: I finished up the soup and had some apple cinnamon almond flour muffins.
Monday: Baked potato with butter, roasted carrots with za'atar. I will do that again.
Tuesday: Baked chicken thighs with onions and potatoes. And the leftover carrots.
Wednesday: Roasted winter sweet squash slices, with leftover chicken.
Thursday: ditto.

The only frozen broccoli I eat, is the broccoli I blanched and froze. I peel the stems and cut pretty thinly.

This week we ate:

Tues: Took a friend & her kids out for Mexican

Wed: He went to a farm show and ate a late lunch so he snacked. I had a Salad.

Tonight: Date Night - BBQ place. He had Burnt Ends and I had Catfish. (It was the best meal we've had there. But we were fed.)

I roast frozen broccoli in the oven!

If you roast the chicken on top of the bread slices, the bread soaks up all those delicious juices and gets toasty. So delicious!!!

"So much of parenting relies on bribery" -- ha!
There's a small propane range in my camper, which I'm still trying to master--ie, not burn every single item I put in there. I've never tried broiling specifically because that's pretty much what happens every time I use it. As for lying on the floor to use the broiler--clearly your stove was designed by a man. He probably thought the broiler location was a Good Idea.