This was a weird week, because I was in Arizona for part of it. So of course, the home crew ate different foods. I'm not entirely sure what they ate what night, but I do know that I had left a bunch of cooked rice, mashed potatoes, and peas in the refrigerator, along with a few packages of raw ground beef and steak. With these, A. made dinner. He generally combines meat, starch, and vegetable all together in one skillet, and everything is labeled as "man food." So that's what they ate, in various combinations, until Monday.

Here's what I ate, though, courtesy of my mother.

Long version: This was pounded chicken breasts browned then baked in marinara with provolone on top. Very tasty.

My family went for a walk every morning in Arizona. And every morning, we all wore the dorkiest hats imaginable. 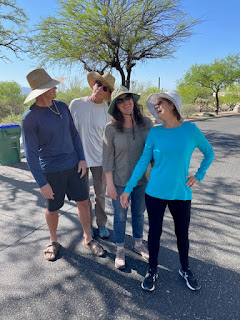 My sister, who took this photo, sent it to me with the label "Goobers." I can't disagree.

Long version: It's really nice leaving home but getting to eat as if I were still at home. This is exactly the kind of meal I would make at home. I did, in fact, make the desserts. This was my sole contribution to all of the food served for three days. 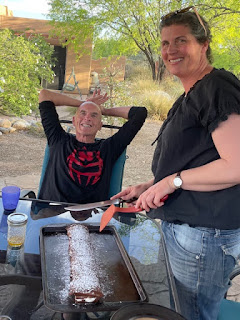 As you can see, I didn't bother serving the roulade* beautifully. No one refused to eat it because I didn't sprinkle it artfully with sprigs of mint and fresh raspberries. (That's my dad in the background, by the way.)

I made the pudding (the same one I always make after making the roulade) because I didn't want to leave my mother with seven egg yolks sitting in her refrigerator. I figured it would get eaten eventually by someone. I mean, does pudding ever get wasted? Certainly not. About half of it was eaten this very night as a second dessert, so I don't think any of it will be thrown out.

Long version: My plane landed in Albuquerque at 4 p.m. and I got right in the car to start driving home. It's a long drive and I wanted to get home before dark. So I didn't stop anywhere except a gas station, which is where I got the Kit Kat. I brought the almonds with me. And I went to bed shortly after getting home, so that was the entirety of my dinner.

I considered stopping at the grocery store in a city I passed on my way home, but I really wanted to get home before dark. So I didn't stop. Given the state of my refrigerator, that was a poor choice. 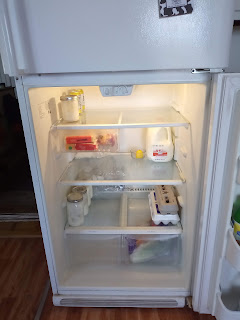 At least I have frequent opportunities to easily wipe it down. 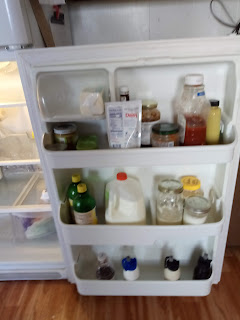 And here's the door, just for fun.

Long version: I had to work this day, and knew I would be in no mood to cook anything requiring much effort. So I took out a bag of frozen pulled chicken in barbecue sauce Miss Amelia gave us awhile ago. The chicken tasted okay, but there was way too much sauce on it. So I dumped out three quarters of the chicken into a sieve and washed off most of the sauce before putting the rinsed chicken in a saucepan with the remainder of the sauced chicken to heat up. The kids enjoyed it on bread.

I had some of the chicken in my salad with some leftover peas.

A. had the very last of the Easter lamb. Yes, it was a week old. It was still fine. I had eaten some in my lunch at work, so I knew it was okay.

The tiny carrots were the ones I dug up a couple of months ago and forgot about in the refrigerator. The ones I missed digging up are the ones that re-sprouted and are growing again. I don't know if they'll make an edible carrot that way, but I guess we'll find out.

While I was gone, Cubby took it upon himself to ensure that there was dessert every night. One of the things he made was brownies, except he followed the recipe I hurriedly wrote out from this one, which, since I already know how to make it, is pretty terse. And doesn't specify the pan size.

It's supposed to be made in an 8x8 pan. He used a 13x9 Pyrex, which resulted in extremely thin and crispy brownies. They're good, actually, like the cookie part of an Oreo, and there has certainly been no lack of willing volunteers to consume them. 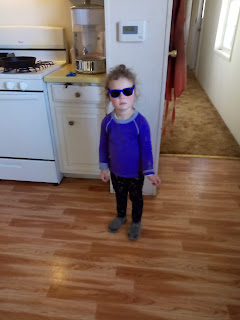 This girl included, here modeling the rad shades I got her in Arizona.

Long version: I took out the frozen shepherd's pie filling from the giant batch I made last week and topped it with the rest of the mashed potatoes on Tuesday. So when I got home from work, all I had to do was bake it.

As Jack noted, it was a smaller shepherd's pie than the 13x9 Pyrex that I usually make, but it was just enough for everyone.

Long version: A good way to close out a long week.

Incidentally, I hope everyone noted that we ate pretty well even when it looked in the refrigerator photos like we had "no food." Behold, the power of chest freezers, stocked pantries, and planning ahead. If I have no other purpose on this Earth, I feel like my life serves as a good example that "running to the store" is definitely not necessary.

* I discovered the recipe is online, not just in my cookbook. You can find it right here if you want to try making it.

We had ...
an outdoor fire supper with brats and hot dogs, potato salad/chips, and marshmallows
hamburgers with potato salad/fries (this is two consecutive days of pretending potatoes are vegetables)
tater tot casserole
hamburger gravy over biscuits with peas
beef and broccoli in brown sauce over rice

I think I have forgotten what we had last Saturday so that's got to be why there aren't enough for a whole week.

Tonight, eggs and hash browns, as my egg supply and potato supply easily exceed our capacity for consumption and I need to get on the stick there. Perhaps roulade and pudding ought to be in our future.

I always do a double take when I see your fridge because we have the same one but with the door on the other side.
Friday-lima bean bake
Saturday-corned beef, potatoes, and cabbage
Sunday-kielbasa left over from Easter, with some leftover pork to make it go around (the grandkids just ate the kielbasa), oven fried potatoes, broccoli
Monday-chicken enchiladas
Tuesday-leftover mashed potato/cheese casserole
Wednesday-salmon loaf, baked potatoes
Thursday-stirfried beef and vegetables over rice

Mon: Grilled Cheese for him. Leftover Pasta Primavera for me

Tues: Out with friends Farmer- Cheeseburger & ff; Me- Riblets & Chicken, potato salad and beans. (It was not a great meal. Farmer's was almost burnt and my meat was over-done and dried out. The sides were institutional grade and not good.)

Sat: Chef Salads with either frizzled ham or Chicken.

We were a bit heavy on the burger theme but we like them. And they are fast. And I have buns we need to use up.