Long version: This is where we stopped on our way home from the zoo, etc. for dinner in a small city about 90 miles from our house. A. and Cubby have a particular fondness for cheap Chinese food, so that's what we got. A. ordered one of the family meals for four that came with hot tea, fried shrimp, egg rolls, rice, sweet and sour chicken, spicy garlic chicken, beef with bell peppers, and some other kind of chicken dish with vegetables.

It was a lot of food. None of it particularly good, but certainly plentiful, and the children enjoyed themselves very much. It was pretty fun to eat out with them for once.

Long version: I had brought home all the leftovers from our Chinese meal. To that I added the rest of the tenderized beef bottom round steaks (do you appreciate my joke up there now? yeah) that I hadn't cooked on Thursday, plus some broccoli, more soy sauce, vinegar, and ginger. I just fried it all together to make something like fried rice. It was better than the original version, honestly. 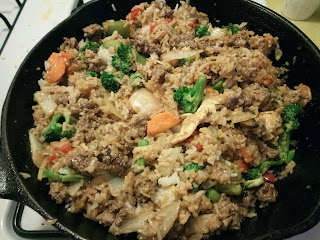 Tasty, but not photogenic. Which describes most of my cooking.

Long version: Brisket cooked with half an onion, mustard, vinegar, and some more of the tomato juice from Miss Amelia.

These peanut butter balls (but you only need half the amount of chocolate). Always a favorite.

Short version: Sloppy bull sandwiches for the kids, leftover brisket and potato for A., salad for all

Long version: A couple of months ago, I put a pressure-canned jar of bull meat through the food processor (not in the jar, though), to further break it down. I froze that the resulting finely shredded meat, and it was this that I used to make something like sloppy joes.

I added some extra tallow and bacon grease to the meat, because the bull meat is very lean and therefore dry. Then I put in the other half of the onion I had cooked the day before, and then some barbecue sauce.

I was making bread, so I made some rolls for the children, and they had their meat in the rolls. It turned out well.

A. had the last half of a leftover baked potato, fried in bacon grease, with the rest of the brisket.

While I was cooking, this was happening on the kitchen floor right behind me. 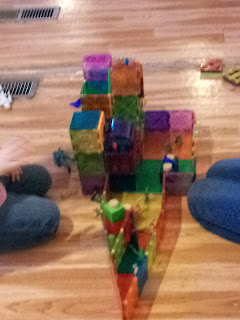 A Magna Tile ramming ship, constructed by Poppy and handily located exactly in the middle of the kitchen.

Long version: I had about a quart of ground beef taco meat in the freezer, which I combined with rice, arugula, some salsa, grated cheddar cheese, and sour cream to make a skillet meal. It was fine.

Long version: Fajita meat, but no peppers. I did add the rest of the cooked onion, but it wasn't real fajitas. Good meat, though. I marinated it in oil, vinegar, garlic powder, salt, cumin, and chile powder. Marinating definitely makes a difference.

Long version: Well, maybe not the WHOLE shebang. But quite a bit of shebang.

Of course I made the stock first thing with the neck and all the innards except the liver. Have to have that first because it's used for so much else.

Turkey--onion, celery, thyme and rosemary from the garden, and a wrinkly apple just for fun in the cavity. I also dry brined it the day before and basted it a few times with turkey stock while it was baking.

Dressing--a whole loaf and a half of sourdough bread with lots of onion and celery, even more butter (like a cup, plus some more on top), sage, and some of the turkey stock

Green beans--my garden beans from the freezer, with finely diced onion and bacon

Cranberry sauce--whole cranberries simmered with sugar and the juice from half an old orange I found in the refrigerator. Mashed when the berries got soft, but not strained. 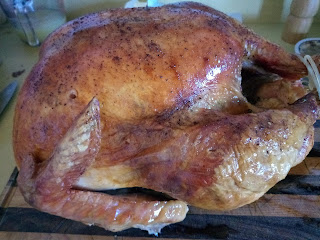 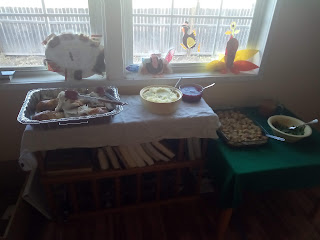 Okay, your turn! What'd you eat this week?
Posted by Kristin @ Going Country at 4:30 AM