This time of year, my refrigerator has several jars of dill pickles in it. I don't actually can cucumber pickles, because they tend to get softer that way. I like how crisp the refrigerator dills are, so I save my pickle canning for dilly beans and use my cucumbers this way.

Line up five clean quart jars. They don't have to be actual canning jars, so you can reuse other jars for this. Wide-mouthed ones are easiest, though.

Heat the water, vinegar, and salt--either in the microwave or in a pot of the stove--until the brine is hot and the salt is dissolved.

Into each jar, drop 1 head of dill (or 1/4 cup fresh dill or 1 tablespoon dried dill weed) and one garlic clove.

Wash your cucumbers and slice off the blossom end, then cut them into whatever shape you like. I usually do spears and then top off the spears with rounds of cucumber to fill the jars all the way. Stuff the cucumbers into each jar until they're almost to the top and cover with the hot brine.

Put on the lids and leave the jars on the counter until they're not hot anymore, then put in the refrigerator. Leave at least a day before eating.

This makes a very strong, vinegary pickle. If you open a jar and find it too strong, just pour off a bit of the brine, fill with water, shake it up, and leave it in the refrigerator for another day. The extra water will leach out some of the vinegar in the cucumbers and they'll be milder.

These will keep in the refrigerator for months. At least four months, which is as long as we've ever had them before they were all eaten.

You can re-use the brine/dill/garlic one more time after all the pickles are eaten. Just heat the the brine, etc. again and stuff it with cucumbers again. You can only do this once, though, before the water in the cucumbers will water down the brine too much.

You can also eat the pickled garlic. It mellows a lot over time, but will be pretty fiery at first. My children (and A.) fight over this.

* The head is the starburst of flower buds that form on the top of each dill plant. If you don't have heads of dill, you can use fresh dill weed or dried dill weed. The dill will float around and stick to the pickles, so it's not as aesthetically pleasing, but will still taste good. 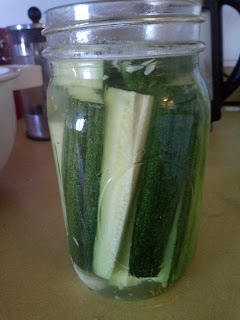 Happy pickling!
Posted by Kristin @ Going Country at 4:30 AM

Soft pickles used to be the bane of my canning existence ... until I learned of low-temp pasteurization. Hold at 180 for 30 mins in a water bath. A thousand percent better than the normal water bath, and not taking up valuable fridge space. This recipe is so similar to my grandma's! I would have to look it up, but it's basically the exact same thing.

Karen.: That's a good tip. Although I don't know if it would work with the Armenian cucumbers I use for refrigerator dills. I think they would still get too soft. I've had such trouble growing standard cucumbers that aren't bitter from the heat that I've decided to just grow the Armenian ones and can dilly beans for winter.

Kit: That sounds like a terrible pickle experience, indeed. I hope you do try these and they restore your faith in dill pickles. :-)

Okra is also pretty good as a fridge pickle. I discovered that this past summer.

I have 5 jars in the refrigerator as I type this. We will see if I am inept or not. You should have seen the looks from the produce person in the commissary. lol

Mei: Why the looks? Because you bought so many cucumbers? Now I'm a little nervous. I hope they're what you've been wanting!