The View from Above

The four dogs spend their days outside, hanging around the property, sleeping in the sun. They occasionally rouse themselves to bark at passing cyclists, but for the most part it's pretty chill. Until I go outside. And then? NON-STOP FUN AND EXCITEMENT.

I don't know why they get so excited when I step outside the door, since 99% of the time all I'm doing is dumping the compost or getting more firewood. And yet, they react as if I'm going to shower them with treats or take them on a walk or something equally thrilling. Then, when all I do is stand there and give them a pat on the head or two, they manufacture their own excitement. Meaning they all press against my legs and start whirling and biting each other's ears and feet. Playing.

I'm flattered they want to include me in their little games, except I end up with the weight of four squirming dogs pressing against my knees, which is not as much fun for me as it is for them. The only way to avoid it is to keep moving--you stop and you're sunk.

Oh well, it's nice to be loved, even if only by four crazed dogs. 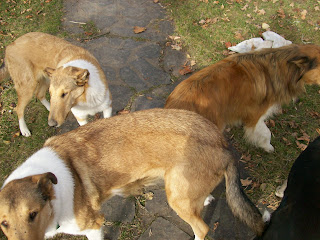 Posted by Kristin @ Going Country at 7:12 AM

My friend's facebook status this morning made me think of you (despite the lack of Blackrock pigs): Porkapalooza. one husband 1200 pounds of pork 15 coolers. kill me now.

Happy Tuesday. go give those dogs some pigs ears or something. They love you.

They are waiting for you to barf up their food ,like the momma in the pack does for her pups. They are so joyous to see you they are overcome with doggy fits. :)

word verification ' nosally'
what mother says when daughter begs for a pony.

Gosh I love dogs! Oscar gets excited just when I walk over to the drawer with my 'play clothes' in it. If I'm putting on sweat pants he's ready for a bike ride!

I always feel a little bad when I leave the dog at home on days I can't bring her into work, but then I remember that no matter what she is going to come out of her skin with Happy when I come back home.

Isn't it great to be loved?