Remember a long, long time ago when I said we had won a ton of grass hay at a silent auction? Well, that ton of grass hay did not come with delivery. Which meant that A. had to haul it in Big Red, his pick-up truck. Despite the name, Big Red is not particularly big or heavy duty. In fact, Big Red is a half-ton Ford. The hay came in three square bales, which means each bale was a third of a ton. Which is, of course, less than half a ton. So it's all good and safe as long as only one bale at a time is transported in Big Red.

A. picked up the first bale awhile ago. It ran out early this week, and so he arranged to go pick up the remaining hay yesterday morning. The remaining hay being two bales weighing in at a total of two-thirds of a ton. Now, A. informs me that the "half-ton" designation on his truck was based on the original model capacity, and that the hauling ability of more modern trucks (yes, in our house, 1994 is modern) is actually slightly more than that. But is it two-thirds of a ton? Let's find out!

A. set off in his truck at about 8:30 a.m. yesterday. The farm is about 15 minutes away. He didn't return for an hour. I was a little worried. When he did return, he actually had me go outside to view the truck, and then he took a picture for his records. 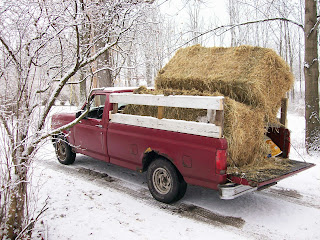 Not good
It turns out that Big Red will indeed haul two-thirds of a ton of hay, but Big Red does NOT appreciate it when that load is unbalanced. And the roads are hilly. And there's snow on them. A. put his blinkers on, stayed on back roads, and drove home at 15 miles an hour*. I must also assume he appealed to a higher power so that his truck wouldn't tilt over into a drainage ditch.

Whatever he did, it worked. And the sheep have their hay and all is well with the ovine world. The end.

* Legal disclaimer: This is a skilled woodchuck maneuver. Do not attempt at home.
Posted by Kristin @ Going Country at 6:17 AM

Ahhhh, woodchuckery. I know it well and fondly having grown up in VT. My husband's current favorite t-shirt is from the "West Pawlet Woodchuck Festival." You all should hop in Big Red this summer and check 'er out.

At the risk of sounding like a total asshat, why didn't he just make two trips?

Lol. A must be related to Mr. B - he would try to do both at once too instead of the logical two trips. (Shaking head). Glad it all ended well!

Because the logistics of arranging with a very busy farmer with a huge dairy farm to have a tractor and a worker to move the hay during chore time was a total pain in the ass that A. didn't want to have to deal with again.

"So, why did you climb Everest, Mr. Mallory?"
"Because it's there."

Ahhh, the sight of all that snow made me wistful. Despite the fact I'm running outside again, I'm wishing for snow instead of the 62-degree temp we will have today.

Here's what this post reminded me of: how I have always found it funny that we call rectangular hay bales "square."

A. should find the person who built the livestock racks for the truck and show THEM that pic...because he should be proud they held that bale up and didn't break and spill the whole enchilada over the side.

He built the livestock rack himself, the day before he went to get the hay. And yes, it proved its worth.

Very good, A. Big Red doesn't appear to be bottomed out on the suspension, and the tires seem not to be squished, strongly arguing that Big Red could handle three bales if push came to shove or to keep the level of excitement high.

my Father in Law is a hay farmer in Upstate NY, and those are HUGE barrels!!!Those are like 3x the size that our baler makes!

Um, half ton means it can carry a half ton per axle. I'm a female G.i.T., remember.