Spring? Is That You?

Well, no.  But end of winter?  Definitely.

I know this because we put in the first maple spiles of the season on Wednesday.  And by "we," I mean A., with the negligible assistance of Cubby and me.

First A. used the hand drill to drill some holes in the trees. 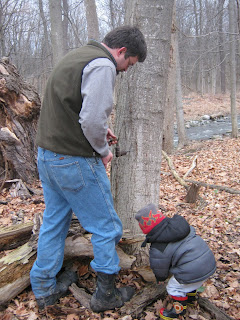 Next A. drove in the spiles (the taps). 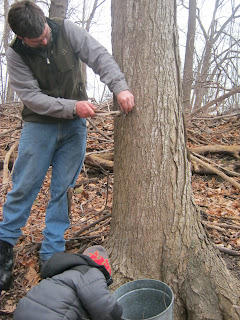 While Cubby picked up the drill and ran off with it.

And then A. hung the buckets with the lids. 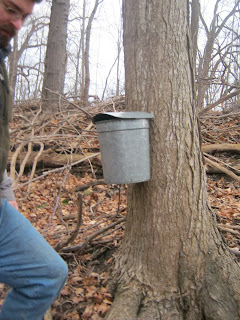 While Cubby disappeared to head purposefully for the creek, with every intention of soaking himself, I have no doubt.  Too bad his mom's such a killjoy and wouldn't let him go swimming.

Some of the trees were actually running the day we put in the spiles, though it was too cold for the sap to run yesterday.  The coming days, however, are perfect sap running weather: freezing at night, above freezing during the day, with sun.

Bring on the syrup.  I only have about half a cup left from last year.

Oh!  And also!  Cubby and I spotted the first snowdrops of the year in the bed by the dining room door.  On the first day of February.

I don't know what the hell Mama N. is playing at here, but I'll accept this unexpected sign of spring to come.  As long as there are no horrific snowstorms waiting to blast us in March.  I put nothing past that Mama N.  She's a crafty one.
Posted by Kristin @ Going Country at 3:45 AM

We need some colder nights for syrup here.
I did see where Denver is getting 1 inch of snow an hour and may get 24 inches....we usually get some of that weather ...then it heads your way....so , who knows what is in store.
Surprise...Cubby ran off with the drill :)
You will have to remind him of all the help he wanted to be when he gets to be a hard headed teenager, who cares to do naught. :)
Beth
P.S. A hot beverage in the morning to clear your sinuses.

We have flowers starting to sprout down here....insert "colorful" Sailor lanuage here!

I am jealous that you are tapping trees. I have always wanted to try that and/or sample hand made maple syrup.

dacentiv: ebonics for "the incentive"

I hope there are still some sugar maples around and they're worth tapping when Cubby's my age...
http://www.youtube.com/watch?feature=player_embedded&v=HzI1SbSpBZc

Lindsey: Homemade maple syrup is about the only product that I can think of that isn't really appreciably different from the commercially produced variety. For the sole reason that it's made the exact same way no matter who's making it. Though perhaps homemade is closer to the Grade B syrup than the Grade A (darker, with a stronger flavor). But you're not missing out by buying real maple syrup at a store.

Yep, that Mama Nature can be, well, surprising.

Yah, we've got snowdrops in the front yard, fat buds on the cherry, pear and apple trees, flowers on the fava beans and a very active beehive.

I even wore flip flops today while checking the bees and that's SUMMER talk right there.

So, yeah, who knows what Muther Nature's got up her sleeve, but I don't call her Muther for nuthin.