Long version: "Hey!" said Jack. "We get to have pizza, and we don't even have any guests!"

For some reason, I really, really didn't want to make pizza sauce, though. Then I remembered the can of spaghetti sauce a neighbor gave us. It didn't have any terrible ingredients in it (except high fructose corn syrup, which is not so much terrible as unnecessary), so I decided to use that. It was pretty bland, and I had to add extra garlic powder, dried onion flakes, and basil, but it sure was easy. And the pizza was good.

The scrambled eggs were for me. They were completely separate from the pizza. I'm sure someone has put scrambled eggs on pizza, but I'm also sure that person wasn't me.

Long version: When I had cut up the boneless pork country ribs a few days before to make goulash, I set aside the cleaner pieces for stir-fry.

Oddly, I had two bell peppers, and almost no carrots. Usually it's the other way around. So the vegetables ended up being onion, bell pepper, frozen green beans, and a little leftover steamed broccoli and carrots. 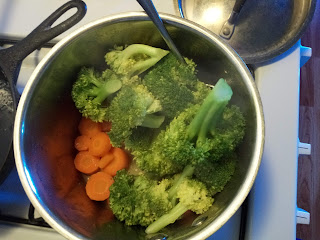 And there they are when freshly cooked! Ah, those were the days, when I had fresh vegetables on hand.

Long version: I made two roasts, figuring that way I would have enough left over for Monday's dinner. (Spoiler: I did not.)

The calabaza was a small, somewhat immature one that I figured really needed to be cooked already. It was fairly tasteless.

Charlie claims not to like either cooked squash or cooked cabbage, so I put a bit of each on his plate. Just so he could tell me which he dislikes more. The winner (or is it the loser?) was the squash. "I don't like cooked cabbage," he said, "But I don't like squash even more."

I made the cookies using Cubby's recipe that calls for melted butter, but I replaced about half of the flour with some of the quick oats a neighbor gave us. And then it was REALLY sticky, so I added some more oats. And then some more.

It ended up being like a cup and a half of oats and a half cup of flour. I didn't increase any of the other ingredients, either, but they came out surprisingly well. A bit dry, maybe, but nothing the chocolate chips couldn't make up for.

Long version: I got home from work and took out the pot roast to heat it up, which is when I saw that there was not nearly enough meat for six people.

Plan B! Which I did actually not have a plan for.

Luckily, there was some batter left from the waffles Cubby made the day before for the after-church second breakfast, so I made the kids waffles. They were SO EXCITED. Little did they know it was just because I was tired and didn't plan ahead sufficiently.

They ate the still-frozen peas before dinner. It would have been kind of weird to put peas on the plate with the waffles, right? Probably no weirder than giving them bowls of frozen peas as an appetizer, but whatever. They ate something green.

Long version: I made the meatloaf ahead of time, and made six small ones rather than two big ones. I had a meeting and didn't get home until about 4:30, so I figured the smaller ones would cook faster. They did, but they also dried out more. Probably because I cooked them too long, because I'm used to cooking big ones.

Anyway. They were fine.

Speaking of cooking things faster, get excited for the upcoming Tuesday Tip involving how to make bake potatoes bake faster.

I know. It's this kind of scintillating content that keeps you coming back for more.

Long version: I had only taken one 2-pound package of ground beef out, which isn't quite enough for everyone, so I had leftover meatloaf with leftover fried cabbage and peas.

Long version: Hey, anyone remember this photo from September? 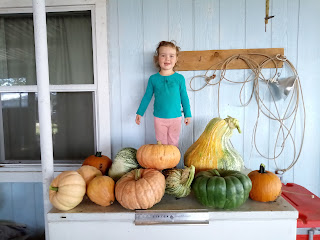 I cooked the very last of those squash that we had stored in A.'s office. The last one was a somewhat immature squash that was lacking in flavor, but it was okay.

And don't worry, I still have several bags of cooked squash in the freezer.

I offered the pineapple after dinner because it's been awhile since we've been to a grocery store, thus the enforced seasonal eating. This is what a refrigerator dedicated to seasonal eating looks like in March: 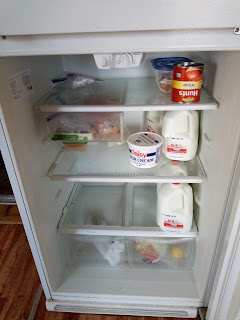 Lots of milk courtesy of the school Sysco program and . . . not much else.
But wait! What about the refrigerator door? Surely that was still full. 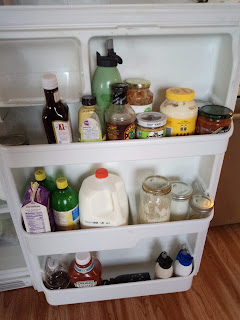 That's a negative, Ghost Rider. (Although I do have a few more condiments than the last time I counted.)
But I had a can of pineapple in the pantry! So that was the kids' "vegetable."
My vegetable inventory until A. goes into the Outside World on Tuesday stands at one head of cabbage, several bags of frozen squash, and a lot of frozen peas.
Okay, your turn! What'd you eat this week?
Posted by Kristin @ Going Country at 4:21 AM

Kudos on the cookies! Very clever recipe adaptation. I am currently trying to re-find my recipe for chocolate cake using chestnut flour; I may just revert to Grandma Bishop's and substitute chestnut flour. How bad can it be, right? Also, the taste test for Charlie was nothing short of brilliant.

Friday: roasted squash, gluten-free pasta with anchovy sauce. Cubby would like it. Just smashed up anchovies and garlic cooked briefly in olive oil and tossed on the pasta.
Saturday: salad, sauted carrots, steak. I bought a pretty large sirloin that was on sale and cooked it to my liking in my grill pan.
Sunday: steak, braised red cabbage, baked potato with butter
Monday: steak again, baked potato with butter, peas.
Tuesday: vegetable soup, polenta, andouille sausage. I use Bob's Red Mill polenta because it's a good coarse grind, and I use the easy method of cooking it: buttered dutch oven, 8 cups of water, 2 cups of corn, 2 teaspons of salt, 2 tablespoons of butter. Stick it in a 350 oven for 80 minutes uncovered. Stir it and cook it 10 minutes more. Add butter and cheese to taste, and there you go. This time I remembered to pour the hot extra polenta into a right-sized dish so that I could cut off pleasing pieces for later meals.
Wednesday: Fried polenta two ways--one with cheese and a dribble of honey, the other half with tomato sauce and andouille sausage.
Thursday: A wedge salad with blue cheese dressing, and then a a portion of fried polenta with the remains of the tomato and andouille sauce.

Tuesday: it was a pretty big steak

When I was a teenager (in the 1980’s), my father owned a video game company. He had some of his games in a pizza restaurant. He would bring home a sausage pizza. In the mornings he would warm up a piece and put scrambled eggs on top of it and that was my breakfast. It was delicious.

Linda: And there's the Pots de Creme again. Love it.

MiL: That's a LOT of polenta for one person. But I know you can handle it. :-)

Kate: Huh. I have never had a potato explode in the oven. You prick them with a knife, right?

Joellen: I love that memory. I knew SOMEONE had put scrambled eggs on pizza. And it was your dad! Ha.

-pizza ...My dad surprised us by coming by and offered to buy pizza for dinner
-pot pie (only way to get my son to willingly eat vegetables)
-cube steak, roasted potatoes, roasted cabbage (similar to the “burnt cabbage”)
-fish, rice, kale chips
-Date Night
-Spaghetti and homemade chicken meatballs
-leftovers and sandwiches

S Fajitas! We had some friends over and that's my friend's favorite meal. I used chicken thigh meat, with taco seasoning and cooked it in the oven, it was good and easy, a win!
S a chopped salad with the fajitas leftover veggies and cheese fondue (can't be too healthy..)
M cesar salad with the leftover chicken
T pesto pasta with cherry tomatoes
W store-boight chicken nuggets and cabbage slaw. I prefer my homemade nuggets tho
T hot dogs and salad
F marinaded horse kebabs on the BBQ (these were SO good!), pesto and garlic butter baguettes, steamed pak choi

With DH at home post-surgery (back, successful) and cooking all the time, we're eating well. I only cooked today, and that was a beef vegetable stew in the slow cooker and cornbread. Simple, tasty, and even nutritious.

Girl Scout cookies for snacks - there was a troop at the grocery store selling.

Also! What condiments have you added?

Daisy: I'm glad his surgery went well. Also glad you have Girl Scout cookies. I'm sure it's been a stressful time for you as well as him.

Well barbecue and steak sauce do make perfect sense with your carnivore repertoire :) I saw this recipe which seemed nice for sheet pan BBQ meatballs and veggies. My BF doesn't like sweet and sour and bell peppers, so not sure I'll bet a chance to try it
https://www.budgetbytes.com/sheet-pan-bbq-meatballs/

Speaking of little meatloaves; I always make mine in muffin cups. They cook in 30 mins. Just enough time to make mashed potatoes in the IP and cook some frozen veg.
Which is what we had for supper tonight.

This coming week I'm doing a pantry/freezer challenge so no shopping. Believe me, we will NOT starve!