Long version: Omelets definitely take more time and effort than just scrambling a bunch of eggs, but omelets are also eaten without complaint by everyone in the family. The same cannot be said for scrambled eggs.

So, extra effort upfront is sometimes worth it to have a meal in which I am not listening to anyone complaining about the food.

Long version: I had some rabbit stock left from the week before, with which I made rice. Thus, rabbity rice. Alliterative, amusing, and tasty.

Somewhat relatedly, Jack's class did a craft last week where they had to come up with a word for each letter in "Easter," and one of his classmates, for the final "e" and "r," chose "eat" and "rabbit."

Look out, Easter Bunny. They're coming for you.

Cubby was required to pick up his room before dinner this day. He enlisted the help of his siblings by promising them a cheese party in his room after dinner for anyone who helped. And he made a poster for the party. 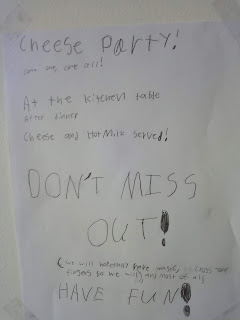 They did have music. Irish jigging music, because what else would you eat at a cheese party? They did not, however, have hot milk. They had water, which of course got spilled on Cubby's floor. And that is why they did not have hot milk.

Long version: Sausage is my new secret weapon in meatloaf. Our good ground beef is pretty lean, so the sausage adds some more fat, as well as more flavor. It also seems to help it stay together even without breadcrumbs, which I prefer not to use.

Meatloaf was not actually my plan for dinner. I had cooked a big piece of pork butt and also had the ground beef out. I had thought to have the pork Sunday and form the meatloaves to put in the oven Monday after work, but at the last minute I switched it up.

Wild, crazy, and unpredictable, that's me.

The reason I had so much meat prepared on one day was because I worked on Tuesday this week, too, so I needed three days in a row of easy dinners.

Long version: And here's the pork! Incidentally, even though it's not Tuesday, here's a tip for you: If you cook any sort of large roast that has fat on it, always save the fat. Particularly with things like pork butt, the fat rendered out of the meat is the best for frying the meat in to reheat it. It tastes like it was just made, instead of like reheated leftovers.

Long version: I made three meatloaves, and there were two left over. So there was plenty for this night, as well as for my lunches at work this week. Meatloaf is good that way.

Short version: A melange of meats, sandwiches for the kids, carrot sticks with curry dip

Long version: Some of the leftover pork made into pulled pork sandwiches for the kids. The rest of the pork fried in more rendered fat for A. and me. A. also ate the last of the leftover brisket from awhile ago, and the last piece of leftover meatloaf.

I hadn't made curry dip in awhile (literally just mayonnaise and sweet curry powder), but it really does elevate plain old carrot sticks quite a bit with minimal effort.

Long version: I really, really, really (really) was not into cooking dinner this day. I had taken stew meat out, but never worked up the necessary energy to actually cook it. At 4:45 p.m., I told A. "Get out the takeout menus. I don't want to cook tonight."

Anyway, in the absence of takeout options (of any kind), I put together a low-energy dinner from the freezer and pantry.

First, a bag of frozen stir-fry vegetables dumped in a skillet, plus some extra onions from the bag in the freezer, plus a jar of pressure-canned bull meat, plus some extra frozen green beans, finished off with soy sauce, vinegar, ginger powder, and peanut butter.

I also made some rice, so it was just like Chinese takeout. Well, except for the actual cooking of it. And the dishes. It didn't produce nearly as much trash, though.

It didn't look like much, but it tasted good. 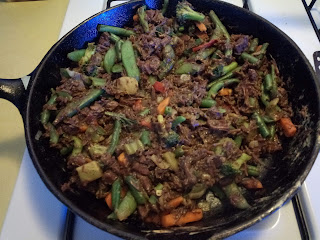 Posted by Kristin @ Going Country at 4:40 AM

Several times this week I considered take-out, and it may happen today.
Friday: mashed potatoes with shredded cheddar choose; late snack of milk and hard-boiled egg
Saturday: beans with pork and some tomatoes from the freezer
Sunday: rice and tuna, with a few leftover beans and some of the tomatoes
Monday: mashed potatoes, celery stuffed with cream cheese, sausage meat that I seasoned from a package of ground pork in the freezer.
Tuesday: sausage meat, mashed potatoes
Wednesday: hominy with tomatoes and chili, pork chop
Thursday: a late lunch with a pork chop and hominy, so supper was popcorn and wine. My vegetables for the week were mainly tomatoes and celery. I realized that I have plenty of tomatoes to use before August. Another finding: the potatoes and carrots at the membership store I shop at are much better than those at the more convenient stores.

Friday - charcuterie platter at a local brewery while drinking beer that was brewed using my husband's recipe and helped brew.
Saturday - pizza with a spicy red sauce, mushrooms, andouille sausage
Sunday - comfort food from my childhood: hamburgers with cheese in the middle and sauce on top, elbow macaroni, sauteed asparagus with garlic
Monday - leftovers from Sunday but with sauteed zucchini instead of asparagus
Tuesday - beef and black bean tacos
Wednesday - white bean bolognese sauce on pasta some of which was leftover elbows, steamed broccoli
Thursday - salmon cakes with a horseradish dill sauce, leftover pasta and leftover veggies from various previous dinners. We emptied several small containers of leftovers
Pam in Maine

my Polish parents-in-law made meat loaf with ground beef and ground pork. I'm not sure they knew what so called fillers were, but they'd have been horrified at the thought of oatmeal, bread crumbs, rice or whatever in their meat loaf! I still make it their way today.
Friday-tuna in cheese sauce, baked potatoes
Saturday-with grandchldren-sloppy joes, potato chips, coleslaw, chocolate potato cake
Sunday - with grandchildren-spam, cornbread, coleslaw
Monday-lentil spinach soup, bread and butter
Tuesday-with grandchildren-pita pizza, broccoli
Wednesday-Mexican turkey casserole (turkey and green chilies with a cornbread crust)
Thursday-salmon loaf, sweet potatoes

It was a wild week with visitors at the farm 3 nights in a row and the start of farm/field work. We ate at 8 p.m. or later every single night (except tonight Sunday). I am never ready for late supper times to start. Somehow it is worse than having to start a meal as I walk in the door after work. At least then I'm done by 7:30 and can relax.

Sun: Mid-afternoon pie with a cousin and his daughter. Corndogs & fries in the airfyer.

Mon: An old friend was visiting his parents (our across the road neighbors); so we ate late again. Tator Tot Casseole. Mixed veg or tomato salad

Wed: (I had a cold Mon-Tues so came home and slept for 2 hours. Thankfully it was breakfast night.)
Waffles and Bacon, with fruit.

Thu: Farmer wanted to go out for Mexican. Who was I to disagree?

Fri: I was late coming home. He had to return the big fertilizer spread to the Co-op. We got take-out pizza.

Sat: Some of last night's pizza for lunch with the kids/grands as our Easter celebration. Supper was AF Corn Dogs for him and I had leftover pizza.