If you like to do dishes*, this post is not for you. But if you, like me, are always trying to minimize the number of dishes requiring handwashing because you don't relish another half hour in the kitchen after all the previous kitchen time required to actually prepare the food, here are some tips for you.

I use cast iron skillets every day. Often the same one multiple times in a day. A skillet might start out the day frying eggs. I don't bother washing that skillet out, and will find ways to cook other things in it for lunch or dinner. So I might use it to saute whatever vegetable I was planning on making, or cook extra onion, or put potato cubes in it to roast in the oven.

I might also use that skillet twice just during my dinner preparations. Say, to cook an onion, which will then be removed from the pan to be replaced with the potatoes to be roasted.

If whatever I'm cooking on the stove needs a lid to steam or something, then I look first to see if I have a larger pan or skillet already in use or dirty that can be used as a makeshift lid. That way, I don't have a separate lid to wash. 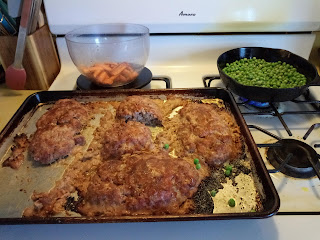 Careful food styling is my primary concern, obviously.
The skillet with the peas in it had been used to make omelets in the morning, and then used to roast the carrots that are in that bowl. The bowl was my salad bowl from lunch. I needed something to cover the peas while they steamed, so I used the half-sheet pan with the meatloaf on it, which also had the benefit of keeping the meatloaf warm while the peas cooked. 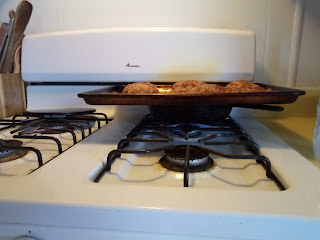 Not as precarious as it looks, I promise.
I could have used a separate pan for the carrots, or a clean bowl to store them in, or a separate lid. But then I would have two or three more dishes to wash.
I'm also constantly grabbing random spoons or forks that have already been used to stir things or turn bacon or whatever. If they're rinsed off and then end up in a pot of boiling water or a screaming hot pan, there's no issue with sanitizing.
None of this saves a ton of time every day, but over the course of many, many days of cooking, a couple fewer dishes to wash is probably a lot of time in all.
Plus, it's a fun challenge to see how few pots and pans I can use to prepare a full day of food.

* I'm not entirely convinced these people exist. Do they? Are you one of them?

Great tips! I literally question myself everyday because I somehow go through an entire drawer of forks, spoons, knives, etc. cooking a few meals - for two people. It's ridiculous.
-Monica

How do you wash your cast iron skillets?

Andra: In soapy water, with a nylon scrubby if necessary. Most important is to dry them over a hot burner or in a hot oven, so they don't rust.

Yes! Yes! Me, too, being careful about germs, of course! If I had cooked meat, I would wash the skillet. Or put the skillet in the fridge between meals, maybe. For bacon, a good wipe is OK.
But I do have to laugh and comment: you call that a LOAF??!!😉

Anonymous J: I know. It's because I don't use breadcrumbs, and use sausage in it. It makes for a much softer mixture that doesn't really hold its shape at all. Ugly, but tasty.

Okay I am a crazy germaphobe so I use new dishes & cutlery for everything. I run my dishwasher every evening and first thing every morning I unload it. I guess I don't feel like its any extra work and if I am going to run the dishwasher why not make sure it's full! ;)

Also, if you had salad in the bowl before the carrots don't you worry about the flavors from the dressings crossing over to the cooked carrots??

Lindsay C: No. I rinsed it out, and it just had olive oil and vinegar in it, anyway. The carrots were roasted in olive oil, too, so it's not a big deal.

I run my dishwaser every evening and unload it every morning, too. But if I didn't try to reduce the amount of dishes we use for six people, I'd probably be doing that twice a day.

@Kristin: That makes sense. I guess because I live alone I really won't ever make enough dishes to fill the dishwasher alone.

And if you're only using olive oil and vinegar that makes sense. I much prefer french / catalina dressing and that red and sweet dressing doesn't really "rinse" out very well. 😉

My mother always told me she was embarrassed that I had to go to Girl Scout camp to learn to wash dishes. We were one of the few families with a dishwasher in my childhood neighborhood; it was quite the luxury.

When we remodeled the kitchen, I washed dishes outside in buckets. Seriously. I didn't mind (much) because I knew the new kitchen would be worth the wait. But enjoy the chore? Nope.

Kristin @ Going Country
My name is Kristin. I live with my husband (A.), three young sons (Cubby, Calvin--formerly known as Charlie--and Jack), and one youngest daughter (Poppy) in a remote county of New Mexico. We have two dogs (Jasper and Odin), one horse (Samson), a Welsh pony (Bill), about a dozen anonymous chickens, and a small flock of unnamed sheep. Plus some meat rabbits, because we obviously did not have enough animals. Once upon a time I was going country. Now I'm gone.