Long version: I made an extra baking of bread so I could give some to neighbors with the apricot jam I've been making, so rather than making garlic bread again with some of the dough, I made pizza. One was just cheese, one had the last of the leftover meatloaf and some cooked beet greens.

I cooked the meat one in a cast iron skillet, and it came out looking just like a Pizza Hut personal pan pizza (only a little bigger). 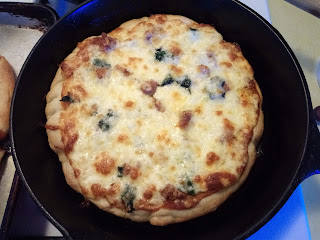 All we needed were those blood-red plastic cups filled with Pepsi to complete the experience. (If you know what I'm talking about, you are probably in your forties.)

Long version: A. left  in the afternoon to stay near the Denver airport so he would be on hand to pick Cubby up early the next morning. The rest of us went to church at 4 p.m. and had tacos when we got home. They were just some beef stew meat I had cooked the morning before with no particular purpose in mind, plus cheese and salsa in corn tortillas.

I made the milkshakes because I needed a good bribe to get Calvin and Jack's room really picked up. Like, everything all around the edges and in the corners and all. I ensured cooperation from the children by promising a milkshake.

None of them even knew what a milkshake would taste like. Shocking. Guess it's been awhile since I've made one.

Long version: This was the day Cubby came home from New York. A. had prepared one of the meat chickens for his welcome home dinner--Cubby can eat astonishing quantities of chicken--but we actually met A. and Cubby on their way home from the airport in the town an hour from us where our mechanic is so we could drop off the van for some work.

We didn't get home until 4 p.m., which is too late for roasting a chicken for our usual 5 p.m. mealtime. So I went with another of Cubby's favorites: fish.

I made the apricot popsicles out of some apricots from our neighbor's tree that I had just pureed with honey, plus extra maple syrup, a bit of orange juice left from a treat we got the kids during a long drive awhile ago, and heavy cream. They were good, but they needed a bit more sweetener. They were a little tart.

Long version: So the first meat chicken we ate ended up being 7.6 pounds when it was all ready to go in the oven.

I even had some left over for chicken salad the next day, which is not usually the case when we have chicken.

The chicken was obviously one we raised ourselves, but so were all the vegetables. 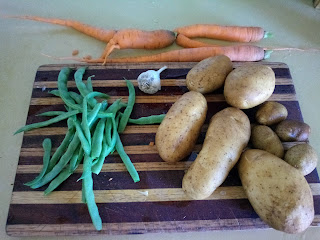 All collected twenty feet from my front door. My favorite kind of produce.
All of that roasted in the oven along with the chicken.
The watermelon was one that A. and Cubby bought from a roadside stand in Colorado. That seems to be the only way to get real watermelons anymore. And by "real," I mean "with seeds." Because you all know how I feel about seedless watermelons.
This is the first real watermelon we've had this summer. It was delicious.
Tuesday
Short version: Beef pot roast, rice, frozen peas, watermelon.

Long version: A nice big chuck roast cooked in the morning before it got too hot.

Which is pretty much all I have to say about this meal.

Long version: Anytime I use the food processor to make a smoothie for lunch, I always find something else to make with it. This time, that was pasta sauce. I had a can of tomatoes in the refrigerator--the juice of which I had put in the the pot roast--so I used that, plus olive oil, two heads of garlic I roasted with the chicken with no particular purpose in mind, balsamic vinegar, and basil. I added that to the pasta for the kids, plus some diced beef and asadero cheese.

A. and I had the leftover pot roast with some sauce and cheese.

Green beans from the garden. Yay!

Long version: Last time I made the curried split peas, I froze a quart container of them without any sour cream in it. So all I had to do was add that before serving. Freezing can make things mushy when they thaw, but since split peas break down when they're cooking anyway, it's not an issue. And it was very convenient.

Your pizzas sound wonderful. I haven't made a pizza in ages; must do that soon. Tomatoes will ripen soon, and a homemade pizza is a great way to use the fresh tomatoes.

I love bringing in my own veggies, too. I'm kind of bummed that we're waiting for a replacement freezer because that means I can't prep much for freezing, and we much prefer frozen vegetables to canned, even home-canned.
Anyway. Yummy pizza!

Kristin @ Going Country
My name is Kristin. I live with my husband (A.), three young sons (Cubby, Calvin--formerly known as Charlie--and Jack), and one youngest daughter (Poppy) in a remote county of New Mexico. We have two dogs (Jasper and Odin), one horse (Samson), a Welsh pony (Bill), about a dozen anonymous chickens, and a small flock of unnamed sheep. Plus some meat rabbits, because we obviously did not have enough animals. Once upon a time I was going country. Now I'm gone.