So instead I just cut them into strips and fried them in bacon grease with spices. Still good, but not chicken-fried steak.

Long version: I forgot to add extra tallow to the meatballs, so they were a bit dry. Boo. Grass-fed beef is just a lot leaner than I prefer for ground beef.

I got one small cauliflower from my Misfits Market produce box, which is what I used to make curried cauliflower (steamed cauliflower, sweet curry powder fried in coconut oil, salt, cream). Cubby is the only other person in the family who likes it besides me, so there's always plenty.

In somewhat related news, I finally replaced the ancient, and now shredded, potholders the MiL bought at her church craft fair at least a decade ago. 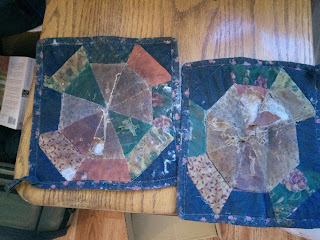 I won't tell you how long I used them in this condition.

Long version: I bet you can guess that I got the golden beets from Misfits Market. I roasted them along with the pot roast, then peeled and sliced them and added some butter, vinegar, maple syrup, and salt, in an approximation of Harvard Beets. So good.

I had bought vanilla ice cream at the tiny store in the village for Sunday dessert. It was Cubby's turn to choose, so I asked him what he wanted me to do with it. He wanted a milkshake, but everyone else wanted plain ice cream. I was loathe to use my big blender to make just one milkshake, but then I remembered the smoothie cup that came with the immersion blender the MiL gave me for Christmas.

I used that to make a chocolate milkshake for Cubby (okay, and me too) with the ice cream, milk, and cocoa powder, and he was very happy. I was happy I could just put the top of the immersion blender in the dishwasher instead of washing multiple parts of a blender by hand. The others were happy with their ice cream and maple syrup.

Long version: We went to our friends' house for lunch last week, where we had chili and cornbread. The chili was a ground beef and bean version that my children declared the best chili in the world. I usually make chili with stew meat, but I always preferred it with ground beef myself, so I used the rest of the ground beef I took out for the meatballs to make chili with pinto beans on Sunday.

That worked well, as I was only home for about an hour in between getting home from work and going back to the school to bring Cubby for an event. I heated up the chicken and cheese quesadillas left over from the school lunch and the kids dipped those in their chili.

They told me the chili wasn't as good as my friend's chili. She buys some kind of chili seasoning mix that I obviously didn't have, so I guess that was why.

The cookies were also given to me by the school cook. She had made a batch in which the butter was too warm, which results in the cookies spreading out and getting very crispy. They were still tasty, though, and my children had no problem eating them.

I didn't serve a vegetable, because I was very tired and rushed. I figured the tomatoes in the chili and the raisins in the cookies would have to suffice.

Long version: Two boxes of too-salty Annie's macaroni and cheese, but only one of the cheese packets, plus some of the chili. And there's dinner for the children. All of them except Poppy liked this. She proclaimed it "too cheesy." I suspect she doesn't really like the taste of the powdered cheese. Can't blame her there.

A. had chili and rice.

I had a salad with leftover barbecue meatballs in it.

Long version: Corn tortillas+cheese+chili=soft tacos. That's what the three younger children had. A. had some of the chili and more rice.

The rest of the rice I added to another container of the post-Thanksgiving turkey soup I pulled from the freezer, along with peas. Cubby and I had that.

When there are leftovers to be eaten and not enough to go around, the best strategy is to divide and conquer.

I bought the pineapple from Misfits Market, mostly for Calvin, who loves pineapple. However, when the pineapple arrived, it was very, very green. Like, not a hint of yellow on it anywhere.

I did not think this boded well for its tastiness, but I left it on the counter for a few days to see what would happen.

What happened was that it got a bit soft around the stem and at the base, but still no yellow.

I cut it up anyway, figuring if it was soft, it would next start to rot. And it was just as dry and tasteless as I feared.

In an attempt to salvage it, I cut it into wedges and caramelized them in brown and white sugar and butter. I let them get a little bit brown, and they looked pretty good. 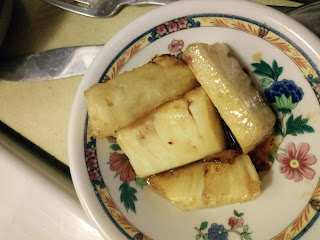 As we all know, however, appearances can be deceiving.
There was still no discernible pineapple flavor when I tasted a piece, so I added some maple syrup over the top.
Still disappointing. Only about half the family ate theirs.
So much for that pineapple. In fairness, it was the only item of produce I got in that order that was substandard.
Okay, your turn! What'd you eat this week?

We spent much of the last week in Austin, TX visiting our sons so I did a lot less cooking
Friday: rotisserie chicken, leftover rice, gravy and sauteed yu choy with mushrooms at son #2's apartment. The yu choy aka choy sum was a new vegetable for us and it was delicious. I'm going to try to grow it next year. I'm sure the cabbage worms will be excited
Saturday: pizza and stromboli at a brew pub
Sunday: leftover chili and rice at son #2's apartment
Monday: sausage and kale on linguini at son #'2 apartment
Tuesday: just the cookies and nuts that airlines hand out on our trip home. We ate a fairly substantial taco lunch at the airport before we boarded and it sustained until be got home
Wednesday: lentil bolognese on pasta, steamed broccoli
Thursday: leftovers from Wednesday
Both of our sons are chefs so when they cook, it's always delicious. Son #1 managed to come down with the Vid on Friday so we did not get to spend as much time with him as we would have liked. He is vaccinated so his symptoms were mild and were mostly gone by the time we left. Next year he can cook for us too.
Pam in Maine

Pam: I had to laugh at your comment about cabbage worms. And also cringe, because those little buggers really gross me out. I've found enough worms in my cooked broccoli that I'm leery of growing it anymore. Even soaking with salt water doesn't get them all.

Hello, this week we ate:

Monday - Spicy chicken with peanuts, zucchini and peppers over rice

Tuesday - Got home late so I scrambled a couple of eggs which I topped with cheddar and green onions.. this I served on top of toast, cherry tomatoes on the side

Wendsday - Another busy day loomed so I hauled out my trusty crock pot and put together beef and barley stew. Ate it with avacado toast and cheese (we only had one avacado so I forced myself to share it nicely)

Thursday - Had some leftover chicken and rice to use up so I combined panko and coconut and dredged the chicken in that then pan fried it...with the rice I reheated it with some butter and some leftover roasted yam cubes...sweet and sour sauce drizzled over all. It wasn't bad.

Friday (thank goodness it's Friday) I yet again used my crockpot...to use up the leftover steak I put together beef stroganoff which I'll serve over buttered noodles. Some sort of veggie or maybe some fried apples on the side.

Oh..and what a bummer the pineapple wasn't up to par...nothing better than a perfect pineapple.

Anonymous: That's very generous of you to share your avocado. I must admit to being a little bit of a hoarder whenever I have a precious avocado on hand. I hope you have a relaxing weekend.

Kit: Gingerbread! Fresh gingerbread with whipped cream is SO GOOD.

Sat & Sun no idea. Whatever was in the fridge spoiling.

Monday impulse takeout Chinese. I happened to be in the city passing about a mile away from my favorite place. Sadly by the time I got home I was too tired to eat so....

Thursday - I had just fixed the meal when I got a call that I needed to be 30 miles away an hour ago. So shoved everything in the fridge and ran. Raw veggies (carrots, cauli and ??), roasted chicken thigh, roasted broccoli and fresh fruit.

Friday - another last minute call that I needed to be 2 hours away ASAP. A dear friend met me afterwards as she lives close to there. I didn't know what was around so let her choose. She chose McDonald's. All I can say is ewww? I ate french fries. It filled my stomach but I'm good for another 15-20 years or so. Funny how I loved commercial fast food when I was young but now would prefer to go hungry than eat it.

Today will be Thursday's leftovers so they don't go to waste.

Sara: That's a lot of last minute calls. Yikes. I am totally with you on McDonald's. Even the smell of it is gross to me now.