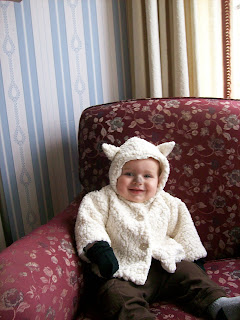 You saw this coming, didn't you? 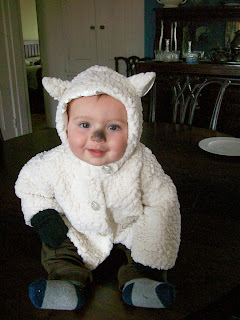 It's so obvious, right? 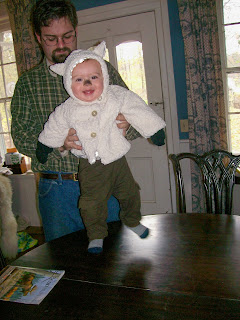 I mean, a lamb and his shepherd. HELLO.
A.'s aunt actually gave us this jacket when Cubby was born. Not as a Halloween costume, but just because . . . well, it's a lamb jacket. OF COURSE she got it for him.

It was WAAAY too big when she gave it to us, of course. But in a wonderful twist of fate, fits perfectly now. So when I remembered we had this fleecy jacket, I figured all I needed to do was pin some ears on the hood. Then I pulled it out and realized there were already ears on it. Handy!

So then I thought maybe I'd just make a little tail to pin on the seat of his pants. But this morning when I put the jacket on Cubby, I saw it has a tail on it.

Well then! So all I had to do was pull some black socks over his hands, rub a little black eyeliner on his nose (might as well get some use out of it, since I never actually wear it myself) and TA DA! World's Cutest Lamb. That we will not be bringing to the butcher.

No, the irony was not lost on us. But Cubby's costume was Meant To Be this year. Next year I might have to actually expend some effort on a costume for him. But I won't worry about that now. I'll worry about it next year.
Posted by Kristin @ Going Country at 1:30 PM

Well now, Cubby HAS to be the cutest little lamb I have ever layed lain laid my eyes on.
I swear I have NEVER seen such a happy baby in all my born days!!
Guess it doesn't hurt a thing that his momma was grinning from ear to ear when she was taking photos. Beth
word verification - walen

Thanks for sharing the wonderful pictures! We pass them around in our family. Mary in MN

Yes, I did see it coming, and it's ever more cute than I expected.

Cubby has the sweetest face. How do you keep from smothering kisses on it every few seconds?

Cubby is the cutest little lamb I ever did see!

Ack! Such cuteness! I can hardly handle the cuteness! That has to be one of the best baby Halloween costumes I've seen.

I LOVE IT! Oh, that Cubby is adorable. I saw a sheep costume that I REALLY wanted to get for Sadie this year, but she has gotten extremely picky about what she'll put on, so I didn't take the gamble.

Your baby is just precious!!!

I love it when the meant-to-be-things are actually handy.

Lamb and his shepherd...too funny, you.