Friday Food: A Big Surprise at the End

Long version: I made the sandwiches for the kids, and then dumped the rest of the tuna salad right on the griddle pan with some shredded cheese to get browned and melty for A. and me. I also out some toasted pecans on top of ours, and it was very good.

Long version: I had stew meat still in the refrigerator because I didn't have the energy to cook it on Thursday. And I had the paprika sludge left on the bottom of the bowl from our egg-dying adventure.

So I made goulash. Seems reasonable, right? I mean, spices are expensive, and I had about a tablespoon of wet paprika to salvage.

Long version: Calling it leg of ram doesn't sound nearly as appetizing, but that's what it was: the last boned-out back leg of the ram A. butchered in November. I marinated it in olive oil, vinegar, salt, and lots of garlic (breaking my garlic press while preparing the garlic--HULK SMASH), then just roasted it and served it with yogurt/lemon/garlic sauce.

The roulade is a kind of flourless chocolate cake rolled around whipped cream. The ingredients are extremely simple--the cake part is nothing but cream, sugar, chocolate chips, and whipped egg whites, and the whipped cream is, well, cream, vanilla, and sugar. The execution of it is little more complicated, but it is delicious and not nearly as heavy and sweet as a standard chocolate cake with frosting. 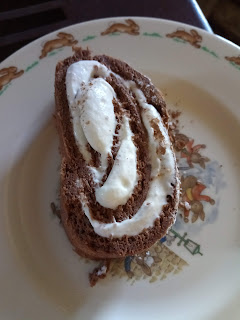 Sort of like a Little Debbie Swiss Roll, only not gross.
I find it amusing that the recipe calls this a "big dessert," and yet my family has no trouble finishing it off. I could probably make two, and they'd still all be eaten.
Then again, I guess we do have a rather big family.
Monday

When a chocolate roulade is on the menu, it means that a double batch of this chocolate pudding will be on the menu shortly. Because, you see, the roulade requires seven egg whites, which then leaves me with seven egg yolks to use. The pudding is certainly a popular way to do that.

Plus, kids with sore throats particularly appreciate cold, sweet, smooth pudding. As do we all. 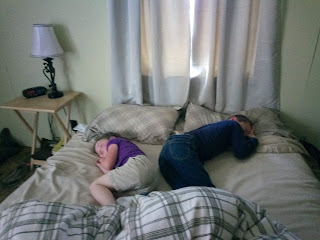 Two of the four sick ones taking a very rare daytime nap together in my bed. Pre-pudding.

The only tricky part of making a double batch of this pudding is the precarious pot situation. 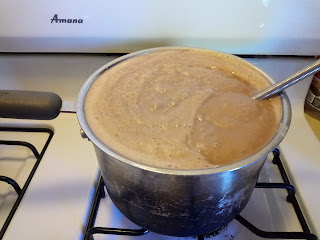 Believe it or not, I didn't spill a drop of this. Small victories.

Long version: We had quite a bit of lamb leftover from Easter, along with about a tablespoon of curry powder sludge from dying edge. Add onion, tomato, and the remainder of the yogurt-garlic sauce from Easter, and you have a delicious curry.

Long version: I had made the shepherd's pie the day before, along with an extra one for our priest, and some additional meat mixture I froze for later.

Altogether, it was six pounds of ground beef. Combine that with the vegetables and tomatoes and other things that go with the meat, and there's another precarious pot situation. 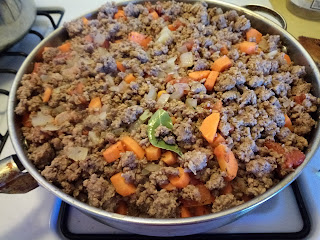 It was a theme this week.
Thursday
Short version: I don't know
Long version: Wait, WHAT? I DON'T KNOW?!
No. And the reason I don't know is that I am not there.
Yeah. This just gets weirder and weirder.

See, I left this day for Arizona to see my family. My sister had a trip already planned to visit my parents, and she decided to take it despite her recent bereavement. So I decided to go to Tucson to see her, as well as my parents and my brother, who will be coming down from Phoenix.

I'm only in Arizona for the weekend, and while I'm gone, A. will be getting food on the table for the locusts. I left plenty of leftovers in the refrigerator for him. I'm sure it'll be fine. Even though this is the first time in nine years that I have not been there to feed the crew.

Oh wait, I take that back. I was gone that one night last year when I stayed at a hotel by myself. I seem to be becoming quite the gadabout.

Sympathies to your sister. And an extra hug.

Hope you have/had a good family visit. Popped over here because I missed your food report over at Frugal Girl!

I'm glad you could be there for your sister. Still so sorry for your loss.

And also wondering why the security thing at the bottom of this never lets me check that I am, indeed and actually, a robot.

Hope your trip goes well. I'm glad you could be with your family.

New here, but have enjoyed reading your comments in other places, so I’ve “subscribed”, and am glad I did! I’m also a newish widow of a middle-aged great guy who died unexpectedly. I’m sad for your sister and family. It will get better, but it’s not easy. It helped to know other people have had happy lives, even after such a sad occurrence. Another thing that helped was my wonderful siblings, who loved him like a big brother and dear friend, so I’m glad you get to be with her.
Thanks for a cool blog! My grandparents moved to NM in the early 1970s, so I’ve been all over the state quite a few times, and can sort of picture things in my mind.

I prayed for your sister and the whole family. Such a loss is so hard.

Our week in food:

Anonymous: Welcome! I'm sorry for your own loss, even though it sounds as if it's not too recent. As you know, it's the suddenness of the situation that makes it so hard, both emotionally and in practical matters. It sounds as if you had and have a lot of support, though, as does my sister, which is important.